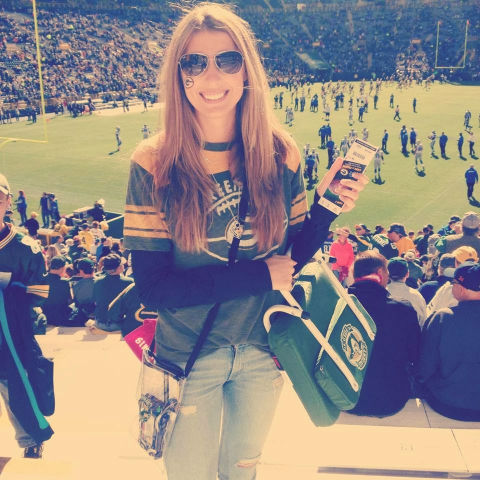 I know. I just ruined your day, but the Green Bay Packers stud linebacker is off the market. Clay Matthews’ girlfriend is Kristi Stalter, according to Terez Owens.

Stalter is a 24-year-old elementary school teacher and fashion blogger/model. Her traffic probably also went through the roof recently. She was in Green Bay for the Lions game last week with her dad and was spotted with Clay, according to T.O.

Our sources tell us Clay Matthews was seen with fashion blogger Kristi Stalter this weekend holding hands and cuddling in Green Bay. The two looked as if they were pretty serious says our tipster.

What else do we know about her? Not a hell of a lot, but Green Bay Packers don’t date models and actresses. They date regular broads like you! Well, except for Aaron Rodgers, who’s dated both a model and an actress.

But he’s QB1 for Franchise1. That’s what he’s supposed to do.

Scroll through for more pictures of Clay Matthews’ girlfriend (this is mostly for the dudes). Also, here’s her website.