There’s Been a Derek Sherrod Sighting! 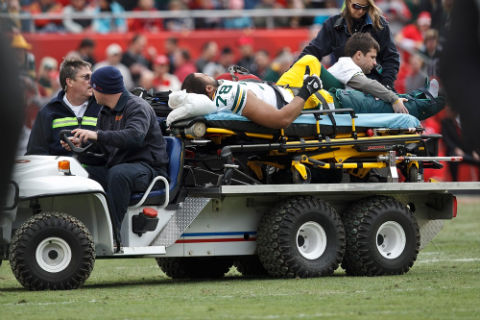 Remember Derek Sherrod? Probably not, since he hasn’t been on a football field in over a year.

The Green Bay Packers chose Sherrod in the first round in 2011. The tackle broke his leg at the end of that season and hasn’t played since. Well, he just might play this year, goddamit!

Sherrod returned to practice on Wednesday after spending the first six weeks of the season on the physically unable to perform list. He’s the first member of that group to return to practice, as well.

Now the Packers have a three-week window to determine what do with Sherrod — add him to the active roster, put him on injured reserve or cut him.

The first option is most likely, unless Sherrod just forgot how to play football. The Packers just put backup offensive lineman Greg Van Roten on injured reserve, so they can use the depth Sherrod would provide. And, if Don Barclay keeps giving up two sacks per game, as he did on Sunday, well then maybe the Packers can actually make some use of Sherrod.

Of course, that also raises the roster conundrum. The Packers will have to make a corresponding move — releasing someone or moving them to injured reserve — when they activate Sherrod.

For now, we’d just like to see if we can finally get something out of the former first-round pick.