Teams Are Asking Brett Favre to Come Back Again 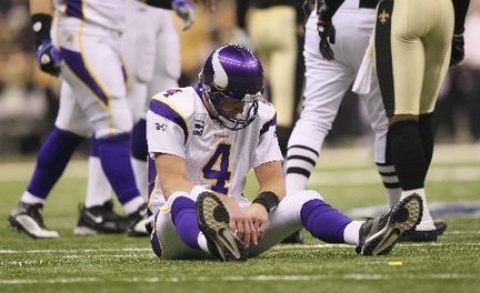 Fortunately for all of us, Favre also says he has no interest.

“I don’t know who, but I think a couple teams have inquired,” Favre said. “It’s flattering, but there’s no way I’m gonna do that.”

One of the teams is the St. Louis Rams, according to the Journal Sentinel. The Rams just lost Sam Bradford for the season to a torn ACL and apparently still have designs on trying to compete in a stacked NFC West.

We’re betting the other team is the Jacksonville Jaguars, who have been terrible behind Blaine Gabbert and Chad Henne and can’t come close to filling their stadium. Favre would certainly take care of the latter problem. The Arizona Cardinals, where Carson Palmer has been awful, could be another option.

But who cares? Favre says his last season in Minnesota convinced him it was time to hang it up for good.

“I had a great career,” Favre said. “I think if anything, the last year I played was an obvious writing on the wall vision if you will, that it was time.”

That didn’t stop Favre’s agent, Bus Cook, from suggesting Favre could come back right now, though. Earlier this season, he said Favre is in the best shape he’s seem him and could play right now.

Cook has always been a shit stirrer like that.