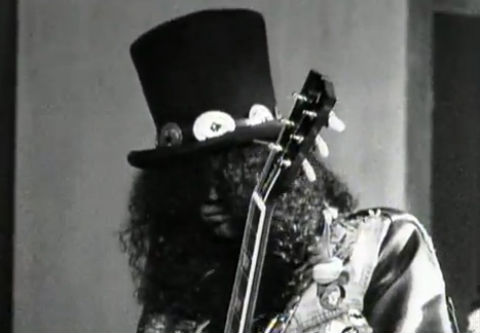 What the fuck are you blathering about? Slash, that’s what. No, not that dipshit that played quarterback and whatever else for the Pittsburgh Steelers and Chicago Bears.

Motherfuckin’ Slash from Guns N’ Roses and Velvet Revolver! Apparently dude loves him some Green Bay Packers, which excites us tremendously because Slash rips shit up.

We’re going to have to update our list of top celebrity Packers fans at some point.

So, now the other question. Who’s this broad who’s sitting there with Slash? Yes, we did the research. She’s Aliya-Jasmine Sovani and she hosts a show on MTV PLAY With AJ.

I’ll play with ya.

Anyway, the show is about sports and music and fashion, which somehow all go together. And of course, I’ve never seen it because MTV is for 14-year-olds. So watch it, don’t watch it. Whatever.

Previous Article
Clay Matthews Could Be Back in Three Weeks
Next Article
It’s Awful, But Adrian Peterson Never Even Knew That Kid