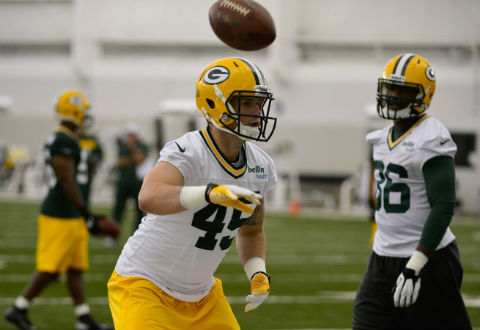 The Green Bay Packers have seemingly solved their wide receiver issues… by signing a tight end. The Packers have promoted Jake Stoneburner from the practice squad.

The Packers are promoting TE Jake Stoneburner from the practice squad. They're short on pass catchers with recent injuries

Are you dumbfounded? We’ll explain in a moment.

The Packers were also sniffing around Denver Broncos practice squad receiver Tavarres King, a 2013 fifth-round draft pick, but the Broncos have decided to promote him to the active roster. That move blocks him from signing with the Packers.

So, Stoneburner. The Packers apparently chose to promote him instead of the receiver they have on the practice squad, Myles White.

Stoneburner was an undrafted free agent from Ohio State. He’s currently the fifth tight end on the Packers roster. Although that may seem insane, Stoneburner is an athlete in the mold of Jermichael Finley.

In other words, he can play out wide like a receiver. Another one of the Packers tight ends, Brandon Bostick — who was a receiver in college — also fits that mold.

Offensive coordinator Tom Clements alluded to the Packers plans to split their tight ends out while discussing how the injuries at receiver would affect the offense.

“Because Jermichael is such a match-up concern for other teams, most teams play him as another wide receiver,” said Clements. “In our mind we still have three receivers. We might not be as deep in that position as we’d like to be, but we’re still going to have our opportunities to be successful.”

So look for a heavy dose of Finley on Sunday. Bostick may also get some opportunities on offense.

He’s been active for three games this season, but has only played special teams up to this point.

Short of another roster move, that’s what you should be looking for on Sunday.