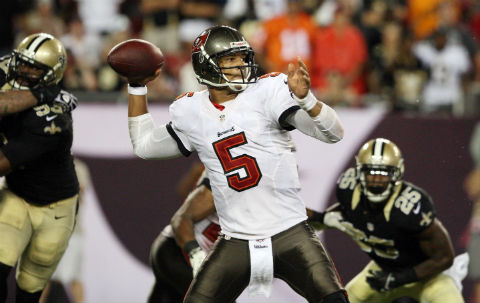 Why the hell should that matter? Van Pelt was the quarterbacks coach in Tampa from 2010 to 2011.

In 2010, Freeman had his best season, throwing for 3,451 yards, 25 TDs and 6 picks. The clowns currently in Tampa were seemingly trying to make Freeman look bad before they released him. Van Pelt didn’t agree with those complaints.

“I loved Josh,” Van Pelt said Thursday. “Josh and I had a good working relationship. He was nothing but a pro when I was there with him. He was never late for meetings. We actually had 6:30 (a.m.) quarterback meetings; we were an hour before anybody else, and I never had an issue or anything like that. He did everything that I asked him to do.

“He was a great teammate, watched him work around the other guys and had a lot of respect for him. I don’t know what happened, but I know the guy that I was there with I really enjoyed being with.”

Freeman is an NFL starting quarterback, but he’s been connected to the Packers as a potential backup for Aaron Rodgers. While we don’t really see a long-term scenario where Freeman is with the Packers, maybe he’s a short-term solution.

Freeman could benefit from the stability of the Packers after leaving the clown show that is Tampa. Not to mention the time with supposed quarterback guru Mike McCarthy.

Of course, when Freeman leaves to be a starter somewhere else, the Packers will need to find a backup again. Maybe they’ll finally draft someone in the first few rounds instead of trying to turn guys like Graham Harrell and B.J. Coleman into NFL quarterbacks.

What do you say, Big Ted?