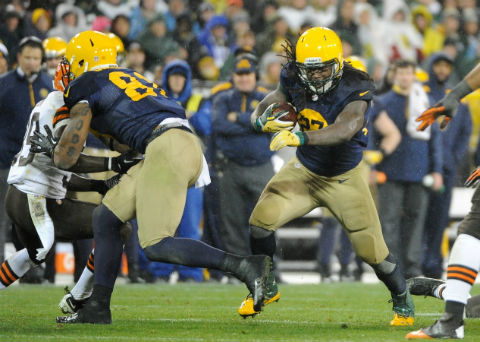 So the Green Bay Packers beat the Cleveland Browns today by a score of 31-13. Surprising. But not really…

The Packers didn’t really give a shit that they were down to just three receivers.

They came out and started winging the ball all over the field.

We all expected an early effort to run with Eddie Lacy.

Lacy had a solid 82 yards on the ground, but he didn’t get the majority of those yards until the second half. At that point, the Packers had the game in control.

Like we said coming into this game, Cleveland quarterback Brandon Weeden was the key. And that’s only because he’s usually horrible.

He couldn’t move the Browns offense.

Meanwhile, Rodgers was hitting opportune throws. Lacy was making opportune runs. Can you remember the last time the Packers ran on 3rd and 5?

This was a team we were supposed to beat and we beat them soundly.

First place in the NFC North? Bring it on!

Jermichael Finley is in Intensive Care

Jermichael Finley is in Intensive Care