Here’s Someone Suggesting the Packers Trade for Larry Fitzgerald 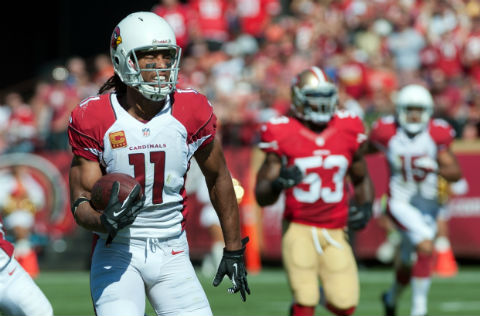 That someone would be Greg Garber. He writes for ESPN.com. We should also point out he deems the fantasy trade unlikely, which means it’s just click bait, but let’s look at it anyway. Arizona Cardinals receiver Larry Fitzgerald to the Green Bay Packers.

In this completely farcical fantasy trade, the Packers would give up Jordy Nelson, Johnathan Franklin and their 2014 second-round pick.

The idea is, Fitzgerald is still one of the best receivers in the NFL and could make another Super Bowl run with Green Bay. The Cardinals, meanwhile, need young talent.

Only a few problems here, Garbs.

Ted Thompson does not give up good, young talent. Jordy is 28 and Franklin is 24. Thompson also doesn’t give up high draft picks, unless he’s wheeling and dealing during the draft itself.

The Packers develop from within.

At 30, Fitzgerald probably has four or five good seasons left in him, but he also has a salary cap number of $18 million in 2014. The Packers have their own guys to sign in 2014 — B.J. Raji, James Jones and Jermichael Finley, if he can still play, to name a few.

Besides that, Aaron Rodgers doesn’t need a Fitzgerald or a Megatron or a Dez Bryant. He can make pretty much anyone good. See Greg Jennings. Christ, Jarrett Boykin had more than 100 yards receiving last week and he went undrafted and then was cut by Jacksonville before ending up in Green Bay.

All in all, a pretty stupid suggestion.

By the way, the trade deadline is on Tuesday.

Previous Article
Jermichael Finley Out of Hospital, Talking Comeback
Next Article
This is Clearly the Only Good Thing About the Minnesota Vikings