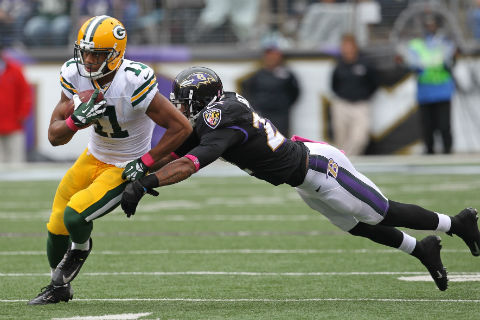 The Green Bay Packers gutted out what proved to be a costly 19-17 win over the Baltimore Ravens on Sunday. It was costly in that the Packers lost both Nick Perry and Randall Cobb with broken bones.

They also lost James Jones, but it looks like Jones will be back sooner rather than later. We’ve talked enough about the injuries for now, though. Here are five more thoughts on the game that was played.

Micah Hyde should be back on your radar.
The Packers rookie corner looked impressive during training camp and then had a rough start to the season. That allowed Davon House to move back in front of Hyde on the depth chart. House was pretty good on Sunday, knocking down three passes, but then he disappeared. Word is, House asked for a break because he was gassed from playing defense and special teams. That gave Hyde a chance and he did so much with it, the Packers couldn’t take him off the field. Hyde put up seven tackles — good for third on the team — and had a sack. He also averaged 13.6 yards on five punt returns.

Jamari Lattimore can play.
He wasn’t spectacular, but Jamari Lattimore played well enough filling in for Brad Jones on Sunday. Lattimore had three tackles, but two of those went for a loss. What’s probably even more telling is the Ravens couldn’t get their running game established at all. Ray Rice finished with just 34 yards, averaging 2.4 yards per carry. That shows Lattimore is no liability.

Jarrett Boykin needs to step up.
Understatement alert. Jarrett Boykin was the Packers No. 4 receiver on Sunday, but became their No. 2 after Jones and Cobb went down. Boykin had an awesome catch and run for 43 yards on his only reception of the day. While that was swell, it was what he did before that that was troubling. Namely letting balls him him in the hands and then watching as they harmlessly fell to the ground. Boykin was targeted six times and made just that one catch. With Cobb out an extended period, Boykin is going to get a lot of targets. He better work on his concentration.

The secondary seemed like they took a step back on Sunday.
There’s been some stuff to like in the Packers secondary so far this season. Sam Shields and Morgan Burnett are primary among those things. The first guy was invisible on Sunday, though. Just one tackle and one pass knocked down. Burnett, meanwhile, was solid with nine tackles. However, the Packers didn’t have any picks and Joe Flacco torched them for 342 yards and two touchdowns. He averaged a pretty stout 10.1 yards per pass, too. The Packers did do pretty well against Torrey Smith — just one catch for 12 yards — but they let guys like Tandon Doss (99 yards), Dallas Clark (81) and Marlon Brown (71) beat them for big plays.

All these field goals are getting old.
Great for Mason Crosby that he kicked four field goals on Sunday, but this shit is getting old. Crosby kicked five field goals last week and that’s super too. However, that also means the Packers aren’t finishing drives or converting third downs when they cross into the opponent’s territory. That’s going to come back to haunt them when their defense has an off day.

Previous Article
James Jones May Play This Week, Randall Cobb is Out
Next Article
Here Are the Packers Options at Receiver