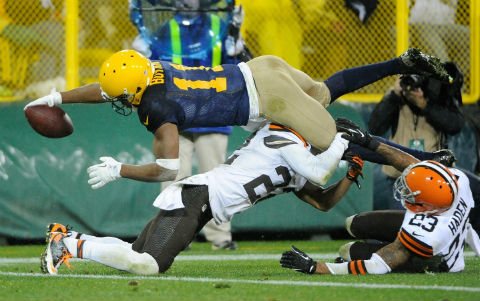 The Green Bay Packers handled the Cleveland Browns 31-13 on Sunday, despite not having several of their best players. They’re the Browns. We’re the Packers.

Supposed to happen, but here are five more thoughts nonetheless.

Jarrett Boykin. Steppin’ the fuck up!
No James Jones. No Randall Cobb. And Jermichael Finley left with a neck injury. No matter. Jarrett Boykin led the team with eight catches, 103 yards and a touch. Last week, when Boykin had to come in, he dropped more balls than he caught. On Sunday, Boykin was a boss. The Packers needed him and he came through. This is a guy who went undrafted last season and now he’s a baller. Kudos to Big Ted and The Buffoon for seeing something in a guy no one else did.

That being said, Aaron Rodgers makes anyone good.
Seriously, you and I could go play receiver for the Packers and we’d each have 100 yards and a touchdown. Not taking away anything from Jarrett Boykin, but it seems like it doesn’t matter who lines up at receiver for the Packers. Aaron Rodgers will make them awesome if they can get any kind of separation. Down two of his top three receivers — don’t give a shit. Still throws for 260 and three touchdowns.

Your days are numbered Jerron McMillian.
This cat was supposed to start at safety at some point. Now he can’t even get on the field. McMillian was awful early in the season while Morgan Burnett was out. Against Cleveland — and you probably didn’t notice — McMillian barely played. He played just one defensive snap. The Packers went to rookie Micah Hyde, who’s played well, in the dime. That was McMillian’s role. They also used undrafted free agent Chris Banjo ahead of McMillian. Banjo actually took snaps away from the other starting safety, M.D. Jennings. I don’t know where they find these guys, but it’s clear McMillian has no role on this team right now.

Brad Jones, you might not be getting your job back.
Brad Jones missed his second consecutive game due to injury. Jones has been good enough, but his replacement, Jamari Lattimore, killed it on Sunday. Lattimore was impressive in his first start. He was a badass in his second. Lattimore had a team-leading 12 tackles, a sack and he knocked down a pass. Dude makes plays. Reminiscent of when Desmond Bishop replaced Nick Barnett.

These guys can ball.
1. Davon House. How can you not have this guy on the field? First pick on Sunday. Three tackles. Knocked down three passes. I don’t know what happens when Casey Hayward comes back, but Tramon Williams should probably be looking over his shoulder. 2. Eddie Lacy. Carried 22 times for 82 yards. Caught five for 26. Ran for a score. This against a really good Browns defense. If there was any doubt, there shouldn’t be anymore. This guy makes the Packers offense better than it’s been since Ahman Green was toting the rock.

And here’s one more. Don Barclay, as much as I like him as a run blocker, is still awful as a pass blocker. Hasn’t improved. May need to be replaced.

Aaron Rodgers is Taking the High Road on Greg Jennings

Aaron Rodgers is Taking the High Road on Greg Jennings