Dominic Raiola Reinforces How the Detroit Lions Do Things 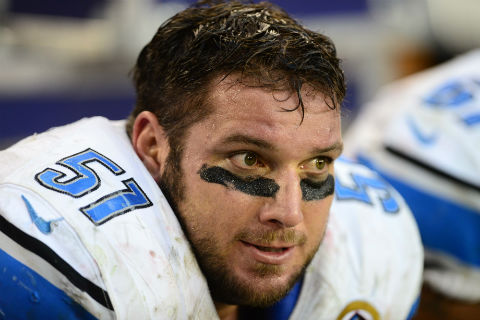 Where the hell to even begin on this one? Dominic Raiola is the Detroit Lions center and has been for quite a while, so he’s accustomed to losing in Lambeau Field.

He’s also accustomed to being a dick. Last week, Raiola was talking about how Green Bay Packers fans moon players from the opposing team as they leave the stadium and how he’s wanted to fight those people. He explained that was just a symptom of frustration that comes from losing.

Well, Raiola apparently let whatever pent-up frustration he had boil over yesterday and he took it out on the Wisconsin band, which was performing at the game. Here are the highlights from Tom Melton’s post.

According to a Wisconsin tuba player, Raiola and his teammates were engaged in their pregame warm-ups on the field near the goal line when he turned around and called him and the other tubas “fat motherfuckers” and told them that “they sucked.” According to that tuba player no one in the band had done anything to provoke him, and no other band members I spoke with witnessed anything that could have provoked Raiola. The tuba player I spoke with made sure to point out that the rest of the band hadn’t even been on the field yet, and none of the tuba players said anything to him, so no one in the band could have provoked Raiola prior to him making those comments.

According to this band member Raiola made comments regarding his sexuality, as well as other insults involving his sister and recently deceased mother. An additional band member confirmed this story, adding that one such insult was “[Raiola] was going to take his trumpet and shove it up his sister’s pussy” in addition to Raiola “repeatedly calling him a fag.” According to this band member “as soon as we stopped for our position to play the National Anthem I just heard [Raiola] yelling continually at him.”  Multiple other members of the band reported hearing Raiola uttering homophobic slurs throughout his unprovoked denigrating of the students prior to the National Anthem.

What kind of NFL player thinks he needs to pick on a bunch of college kids who are just at the game to perform for the crowd? We jokingly harp on what a terrible organization the Detroit Lions are — arrests, dirty play, lack of leadership — but this type of shit is off the rails.

What excuse can he or the Lions possibly come up to explain this away?

We’ll be waiting with bated breath.