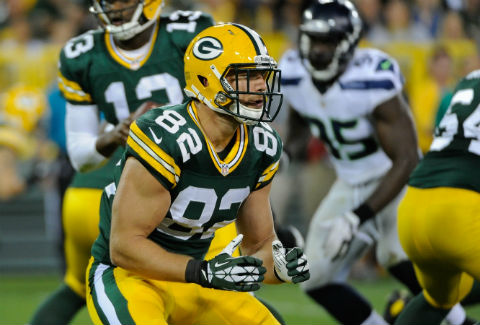 Now that move to promote Jake Stoneburner from the practice squad makes a little more sense. One of the Green Bay Packers 18 other tight ends, Ryan Taylor, is injured.

Taylor, who is a special teams mainstay and occasionally gets some PT on offense, had to have arthroscopic surgery on his knee on Wednesday. He’ll be out several weeks.

So where did this come from?

Taylor played on Sunday. He lifted on Tuesday. Then he had an exam and the Packers found out he needed surgery.

This isn’t exactly a blow like losing Randall Cobb to a broken leg is, but Taylor is definitely a strong special teams performer and special teams aren’t exactly the Packers strong suit at this point.

Stoneburner will likely end up taking over those duties.

That will leave Jermichael Finley, Andrew Quarless AKA God’s Gifts and Brandon Bostick to catch passes.

There’s Been a Derek Sherrod Sighting!