by Monty McMahon
in Uncategorized
53 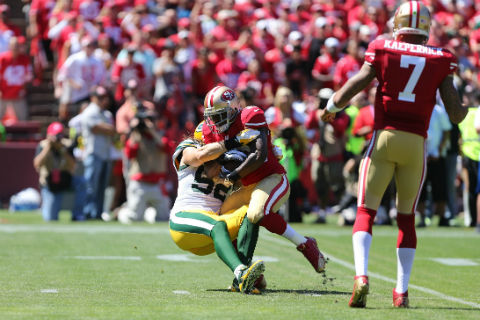 Of course you knew this was coming. San Francisco 49ers coach Jim Harbaugh has something to say about everything. So when the topic of Green Bay Packers linebacker Clay Matthews came up, Harbaugh was 100 percent Harbaugh.

Specifically, Harbaugh addressed the incident where Matthews got the late hit on quarterback Colin Kaepernick and then got into an altercation with tackle Joe Staley.

“I looked at it with my own eyes, I could see two punches thrown to Joe’s head. Well, one punch and one open slap,” Harbaugh said. “If you’re going to go to the face, come with some knuckles, you know, not an open slap.”

“I think that young man works hard on being a tough guy, he’ll have some repairing to do to his image after the slap,” Harbaugh said.

We think you work hard on being a tough guy, Jim. Of course, you just come off as a whiny dick most of the time.

All of the time.

Matthews, meanwhile, admitted his hit on Kaepernick was stupid.

“First off, it wasn’t a very smart play,” Matthews said. “I had already committed to hitting the quarterback. I guess I should have figured he was going to step out of bounds, but it was nothing personal. I went up to him later and was joking around with him. Not a very smart play.”

As for Kaepernick himself, it looks like Harbaugh is rubbing off on him. He was asked about the Packers pregame talk about getting physical with the quarterback and had this to say.

“I’m not worried about what people are saying,” the quarterback said, referencing Matthews’ mid-week comments. “If intimidation is your game plan, I hope you have a better one.”

I think we have a rivalry on our hands here.