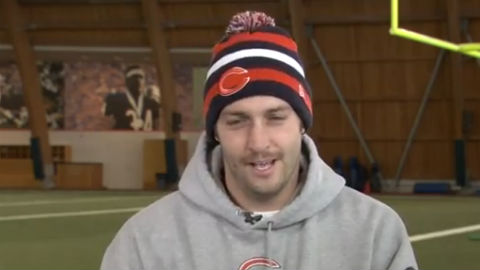 We haven’t talked about our boy Cutty! lately. That’s because Chicago Bears quarterback Jay Cutler has somehow managed to stay out of the spotlight.

He hasn’t been throwing wild 1980s parties. He hasn’t been appearing on talk shows for broads and dishing about his wife’s reality show past. He’s just been sucking Marc Trestman’s cock.

Oh, and he’s been so busy doing that, that he hasn’t had time to call Brian Urlacher. Apparently, Cutty! is not bro enough to call the ultimate Chicago Bears bro when he decides to retire.

Brolacher says Cutty! is the only one of his former teammates not to call him since he ended his career.

“Well, I did not hear from Jay, out of all the guys I played with, but that’s just – maybe we weren’t as close as, like you said, as we could have been,” Urlacher said. “That’s just the way to let you know where you stand with people. But it’s not his job to text me, maybe that’s not his thing. That’s fine. That’s the way it is. I felt like I stood up for him more than anyone else did over the last three or four years in the media. I feel bad for the guy, he takes a lot of grief from the media too.”

Yeah, seriously though, Jay Cutler — kind of a colossal dick, isn’t he?

Urlacher did defend Cutler numerous times when the media was tearing him apart. Even we remember that. Cutty! apparently does not because he’s just so Cutty! Don’t care!

And Cutty! also don’t care that Brolacher is probably one of the best Chicago Bears ever. Don’t need to pay him no mind when he gets swept aside by the team and then graciously decides to retire, rather than signing with, say, the Minnesota Vikings for a couple more seasons.

During his Thursday media session, Cutty! was confronted with his lack of respect for Brolacher. He had this to say.

I guess you will. Now that you’ve been shamed into doing so.