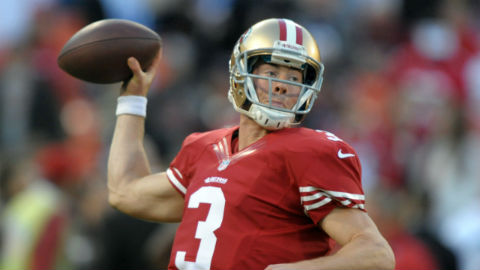 “I think if you’re the Green Bay Packers and you want to be taken behind the veil, so to speak, of what the 49ers do, the best guy to get is Scott Tolzien,” Dilfer told Eric Branch. “Because the whole reason he was on the 49ers’ roster is because he was a smart guy. It wasn’t because he was a highly talented player.”

“There’s tremendous advantage, especially when you play the 49ers because of so much of their success has come because of (offensive coordiantor) Greg Roman’s new wrinkles that he’s given to offensive football, the deception that he’s implemented into this offense. I think if the Packers handle it right – they probably won’t admit it on either side – but if the Packers handle it correctly and ask the right questions, it can really help them with some of the wrinkles the 49ers have that creates such a conflicts for defenses.”

So maybe the Packers won’t be caught totally unprepared like they were the last time they met the 49ers then?

Dilfer went on to detail how he screwed the Seattle Seahawks — then coached by our beloved The Walrus — while he was on the 49ers in similar fashion.

“We beat Seattle those two times my first year with the Niners (2006) because I gave them the entire offensive playbook. I was calling out the plays before they happened. (Seattle coach Mike) Holmgren hasn’t forgiven me to this day. And (Seahawks quarterback Matt) Hasselbeck was so mad at me because we were best friends. But I was devoted to the 49ers and winning the game.”

“We weren’t very good, but we felt like the Seahawks couldn’t move the ball because of the information we had.”

That Seahawks team was coming off an NFC Championship and they won the NFC West the season the 49ers beat them twice. We should also point out that the Packers have much more talent than that 49ers team did.

So is this a major advantage for Green Bay? We sure as hell hope so.

Casey Hayward Will Sit, Plus Some Good News