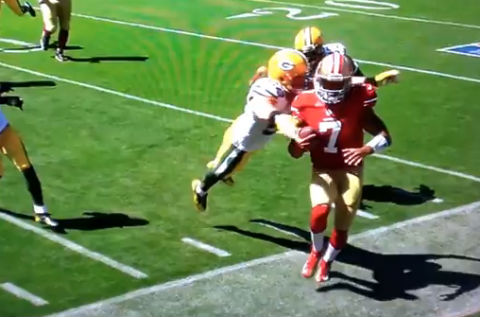 It may not have been the smartest play of the Green Bay Packers loss to the San Francisco 49ers, but it was surely the best one. That is, Clay Matthews grabbing Colin Kaepernick around the neck and planting him into the turf well out of bounds.

Matthews drew a penalty for the hit and then 49ers tackle Joe Staley drew an offsetting penalty when he came over and got into it with Matthews.

The refs then replayed third down and Kaepernick threw a touchdown to Anquan Boldin. One problem. It should have been fourth down. The ref admitted the error after the game.

“The down should have counted,” referee Bill Leavy told a pool reporter after the game. “The penalties were both dead ball, and they should have offset at the spot where the runner went out of bounds. And it would have been fourth down.”

Maybe it would have made a difference in the game and maybe not. If it’s 4th-and-2 in that situation, maybe the 49ers settle for the field goal.

Then again, there’s a good possibility they would have gone for it that deep in Packers territory. It doesn’t really make sense to speculate at this point.