by Monty McMahon
in Uncategorized
31 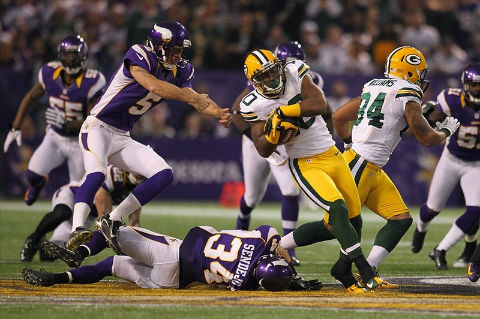 Ross fumbled the first kickoff he received on Sunday. That led to a Bengals touchdown and a quick 14-0 lead for Cincinnati. When he wasn’t fumbling, Ross wasn’t doing much else.

“We made a change today with Jeremy Ross. As always, the roster is a constant conversation,” coach Mike McCarthy said.

“Production and performance are always part of those decisions. We haven’t given up on Jeremy. He had some opportunities. He’s obviously not with us right now, but I have no problem working with him again.”

The obvious solution is to put Randall Cobb back on returns. Cobb has been dynamic in the role, but the Packers will probably look to someone else so they don’t expose Cobb to injury.

The other options on the roster are rookies Micah Hyde and Johnathan Franklin. Hyde handled punts during the preseason and Franklin got a look on kickoffs.

The Packers could also bring in a free agent. They worked out former Jets returner Joe McKnight at the end of the preseason and they obviously have a roster spot now that Ross is gone.

It should also be noted the Packers are now down to just four receivers.