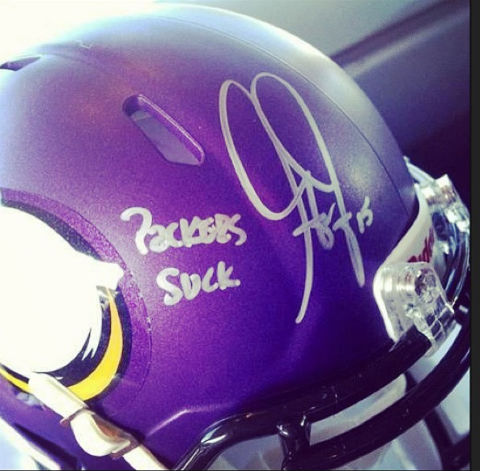 You ready for this one? Here, we’ve got a Minnesota Vikings helmet signed by none other than Greg Jennings and as you can see, it also says “Packers suck” on it.

Well, let us try to put this into context for you.

Some backwards Vikings fan posted this photo to her Instagram account. She says a friend of hers got the autograph and then posted the photo to his Facebook account and of course she loved it so, that she had to repost it. The friend apparently asked Jennings to sign the helmet with “Packers suck” and he obliged.

So, Jennings isn’t going around signing autographs with “Packers suck”… unless someone asks him to.

Anyway, the Packers part of the Internet promptly flew off its handle.

Jennings was busy during the offseason taking shots at former teammate Aaron Rodgers and the organization for brainwashing players. Since the season started, he’s been busy underperforming because, you know, he has one of the shittiest quarterbacks in the league.

Is this a big deal? We really don’t know that it is, but it certainly isn’t sitting well in the eyes of some Green Bay Packers fans.

Previous Article
There’s a Donald Driver Corn Maze Because, Of Course
Next Article
Aaron Rodgers is the Player of the Week