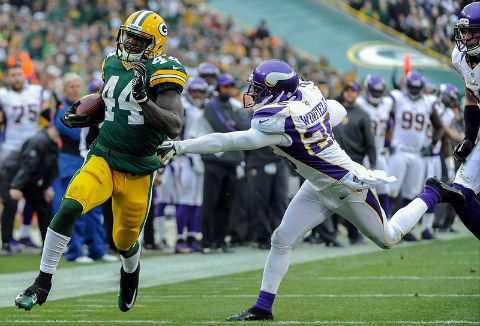 After the Green Bay Packers axed a bunch of guys to get down to the 53-man roster limit yesterday, they released a new depth chart.

We highly doubt anything is written in stone here, but there are definitely some interesting things. For example, James Starks is listed as the No. 1 running back ahead of Eddie Lacy.

Starks looked like a long shot to make the roster at this time last week and hardly got any playing time in the preseason after starting in week 1.

Here’s another surprise. Marshall Newhouse is listed as the first-team right tackle. He was battling Don Barclay for that spot throughout the preseason and it sure looked to us that Barclay had won the job.

On defense, there weren’t really any surprises, but it looks like we now know which way the Packers are going to go at two positions — cornerback and safety.

After being injured for most of the preseason, Tramon Williams got his starting cornerback spot back. At safety, it looks like M.D. Jennings will keep the starting job over Jerron McMillian.

Another interesting thing that this depth chart tells us is the Packers have Davon House ahead of Micah Hyde at cornerback.

Hyde was one of the stars of the preseason and the Packers gave him the starting nod over House in week 2 when both Williams and Casey Hayward were out.

And how about special teams? Randall Cobb is still listed as the No. 1 returner. That’s not too much of a surprise, considering no one else really stepped up and took that role in the preseason.

Watch Jermichael Finley Deliver One of the Worst First Pitches Ever