by Monty McMahon
in Uncategorized
42 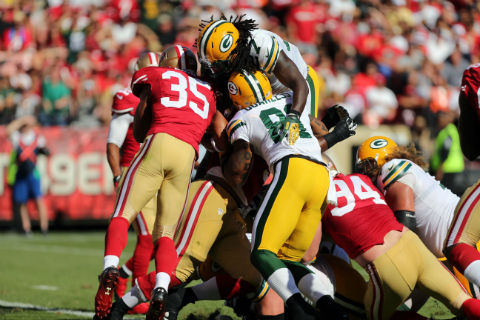 We’ve done some reflecting on the Green Bay Packers season-opening 34-28 loss to the San Francisco 49ers and here are five things that bear discussion. And no, we’re not going to bitch about Jerron McMillian anymore. He’s taken plenty of our abuse.

The defensive line is much improved, but Datone Jones was a non-factor.

The Packers defensive line did a tremendous job of stuffing the 49ers ground game on Sunday. San Francisco totaled just 90 yards on the ground and averaged just 2.6 yards per carry. Several guys made plays, including B.J. Raji, Mike Neal and Ryan Pickett. One guy who didn’t make a play was first-round pick Datone Jones. The rookie was nowhere to be found and we mean nowhere. He doesn’t show up on the stat sheet at all and the Packers gave C.J. Wilson the start next to Raji and Pickett. It looks like Jones is going to take some time to develop, if he develops at all.

Where are the defensive playmakers?

Well, they’re on the defensive line and in the form of Clay Matthews, but they aren’t anywhere else. Or at least they weren’t on Sunday. The Packers turned the ball over twice and still managed to stay in the game. Had their defense generated any turnovers, the final score might have been a different story. Instead, no picks and no forced fumbles. Inside linebacker Brad Jones looked like the guy who was going to assume the playmaker role during the preseason, but even though Jones registered 10 tackles, he didn’t look the part. A.J. Hawk, don’t even get me started on that guy. Same old, same old. And the secondary, aside from a couple breakups by Sam Shields, struggled mightily. Right now, it doesn’t look like there’s a turnover-creating ballhawk in this group. People are going to start wondering where Charles Woodson is if this keeps up.

The Packers don’t want to use Randall Cobb in the return game because they expose him to injury. They didn’t have a choice on Sunday. Jeremy Ross opened the game as the kick and punt returner, but only showed anything on punts. Ross had one punt return for 17 yards and averaged 13.3 on three returns. On kickoffs, Ross was only able to return one kick and that went for just nine yards. This seems like an area the Packers need to address this week.

James Jones led the NFL in touchdown receptions in 2012. We hope you didn’t start him on your fantasy team yesterday. Jones was targeted just twice. He failed to make both of those catches and reminded us of James Jones, circa 2011. That version of Jones was known more for dropping balls than catching touchdowns. Don’t you realize you’re in a contract year, James?

The Packers failure to run cost them this game.

The gap between the Packers and 49ers isn’t that big. The stats for this game bear that out. Both teams had 23 first downs and averaged 6.6 yards per play. Neither team ran the ball well. The Packers were minus-2 on turnovers, but the 49ers committed six more penalties for 41 more yards. The difference was this — despite not going anywhere on the ground, the 49ers stayed committed to the run. The 49ers rushed 15 more times than the Packers, allowing them to pile up 38:35 in time of possession and keep the Packers defense honest. The Packers had 21:25 in time of possession and didn’t have to worry about the Packers running game at all. As much lip service as Mike McCarthy paid to running the football this offseason, the offensive line looks too atrocious to execute that facet of the offense, even minimally.