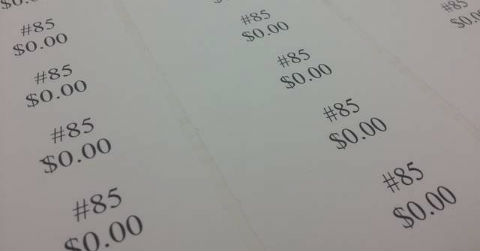 They’re giving it away in Green Bay. After his latest round of moronic comments about being brainwashed by playing for the Green Bay Packers, a Green Bay store is giving away Greg Jennings gear just to get rid of it.

The Jersey Store in Ashwaubenon is giving away Packers gear adorned with #85 — jerseys, hats and t-shirts.

The manager of The Jersey Store, Mike Walters, says the owner of the store wants the #85 items gone.

“The owner is definitely very concerned. She feels like he really stepped over the line with the brainwashing comment.”

Who the hell would want this crap?

Homeless people, maybe. Or, if you’re out of toilet paper, this seems to be a suitable substitute. Just be careful flushing.

“We had a really good relationship with him. We loved him. We’re not quite sure what happened when he put on the purple and gold?”

Meanwhile, some people in the Packers camp clearly took note of Jennings’ comments.

Coach Mike McCarthy addressed it in his press conference.

“I think it’s a product of your culture. Every coach, every player, every support staff member — and I can express to you clearly everybody in the football operation — understands the importance and the value of being a Green Bay Packer. That’s the way we operate, whether people like it or not. We do not do anything to jeopardize that. That’s number one.

“The brand name of the Green Bay Packers is something that all of our players are educated on, and then from that the development of your individual brand, hey go for it, but as long as it doesn’t ever jeopardize the brand of the Green Bay Packers. That’s the only message I’ve ever given to our team on a consistent basis, and our guys are in tune with that.”

Clay Matthews also had some thoughts.

“With his case, obviously it didn’t end on agreeable terms,” Matthews said. “We’re very competitive, both the organization as far as winning, and the players as far as winning, whether that’s on a personal level or on a team level. So it never sits right. Obviously we saw that with a former quarterback here, so it’s something you deal with.”

Wonder who he could be referencing.