We Know Nothing About the Packers After Preseason Week 3 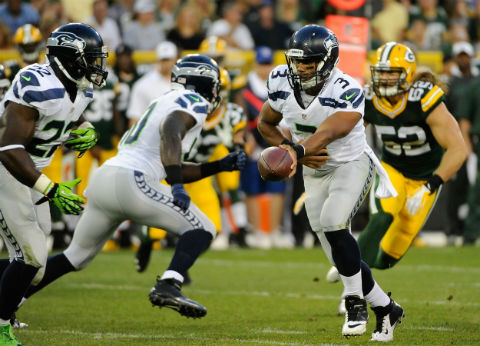 Well, there’s no reason to believe the Green Bay Packers defense will be able to stop a high-powered offense this year. The Packers were gashed by the Seattle Seahawks No. 1 offense on Friday night in what was supposed to be their dress rehearsal.

Although the score was only 17-10, the dress rehearsal didn’t really happen because Aaron Rodgers only played one series — and he again led the Packers to three points, while going 4-for-7 for 41 yards.

Most everyone else on the Packers first teams played at least into the second quarter, if not longer.

But as far as the Packers defense — gashed.

Seattle quarterback Russell Wilson played into the third. His first incomplete pass didn’t come until the second quarter. Wilson started 7-for-7 and finished 11-for-17.

Wilson ended up throwing two picks — one to Casey Hayward in his first game back and one to Jerron McMillian, but that’s the only thing that derailed the Seahawks offense.

Wilson ran once for 13 yards and the Packers held Marshawn Lynch in check (3 carries for 8 yards), but no one else. Lynch’s backup, Robert Turbin, got plenty of snaps against the Packers No. 1 defense and ran 10 times for 50 yards. The third guy, Christine Michael, ran 11 times for 97 yards.

Granted, a lot of Michael’s yards came against the second and third defense, but this is reason to be concerned, dude.

There’s hope in those two turnovers, but then we’re almost going back to 2011. Let’s get into a shootout and hope the offense wins the day!

So, onto the players.

First, Randall Cobb and Tramon Williams were the notables that didn’t play.

As far as the notables who did play, here we go.

Jeremy Ross took most of the returns. The Packers obviously want him to take this job and he gained 33 on one kickoff return and 11 on one punt return.

You should probably also note no one else did shit. Harris got the majority of the playing time and Lacy got plenty too, but neither were able to find a hole. Green’s yards came on a 31-yard scamper halfway through the 4th quarter.

That guy might be sticking around another week, at least. Starks? Can’t imagine he’s on the roster next week.

At quarterback, the Packers similarly wanted Graham Harrell to grab the backup job. He came in early in the 2nd quarter and performed his usual lackluster routine.

Here’s what we’re certain about with Harrell. He cannot throw deep. He’s not accurate. He probably can’t lead this team if Rodgers goes down. Harrell finished 6-for-13 for 49 yards. He also made a pitch in the 3rd that would have been a fumble, had Franklin not landed on it.

Let’s be honest. This guy is a nightmare.

Which brings us to the next guy — Vince Young.

Young hasn’t looked like anything special thus far, but on Friday night, Vince Young showed us what Vince Young can do. He’s not going to throw any pretty balls, but he can lead a team downfield.

Young was 6-for-7 for 41 yards, but he also scrambled for a team-leading 39 yards. Oh, and he also threw the Packers only touchdown — to undrafted rookie Jonathan Amosa on his first series.

Let’s teach this guy the offense and make him our backup, hey Mike?

So, now, let’s single some guys out.

First, here’s an interesting development. Mason Crosby tried the only field goals and extra point. No Giorgio Tavecchio to be found. Oh, and punter Tim Masthay kicked off to start the game.

Sorry to be the bearer of bad news, but that all but tells us the Packers are over Tavecchio and Crosby will probably be shanking kicks in Green Bay for another season.

Want to feel worse? The offensive line looked a lot like a gigantic pile of shit on Friday night.

We’ll start with center Evan Dietrich-Smith, who got pushed around, especially in the run game. Oh, and Marshall Newhouse? You won’t be starting ever again unless someone gets injured. Newhouse was at his most awful against Seattle and he didn’t even play against their first team.

There must be some guys who impressed, though, right?

We’ll start with Brad Jones. How about five tackles, including a sack in very limited action? Robert Francois displaced Jones early in the 2nd quarter and we actually wondered why.

Francois played like a man last week and we actually wondered aloud, “Why wouldn’t Francois displace A.J. Hawk? He’s the one who sucks.”

Anyway, Francois almost came up with a pick late in the second, but he was out of position on Christine Michael’s 43-yard TD run in the third. He also picked up a 15-yard taunting penalty late in the 3rd after McMillian’s pick.

Cornerback Davon House seemed to bounce back. After tanking against Arizona, House got surpassed by rookie Micah Hyde, but he played his best coverage game of the season on Friday.

Speaking of, Hyde started for the second week in a row. And he continued to impress, breaking up a deep throw to Golden Tate early in the 3rd. Hyde played into the 4th, when he was blitzing and stuffed Michael in the backfield. It’s almost as if the Packers see a big role for this guy.

That’s what we know now, which isn’t a hell of a lot.

It now looks like we’re not going to know who this team is or what they have until week 1 against San Francisco.