Vince Young is Visiting the Packers 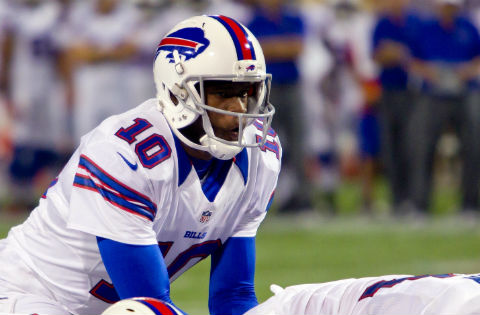 The Green Bay Packers appear to be a bit uneasy about their backup quarterback situation. That’s the only conclusion you could draw from the fact the team is working out Vince Young today.

Young last played an NFL game in 2011 with the Philadelphia Eagles’ “Dream Team.” That year he threw for 866 yards, four touchdowns and nine picks. Not exactly stellar numbers.

Young went to camp with Buffalo last season, but the team cut him before the season began.

What Young may lack as a great passer, he somewhat makes up for with his athleticism and running ability. For example, in 2006, he ran for 552 yards and seven TDs.

So what are the Packers thinking bringing in a guy who hasn’t played in over a year? Part of it has to be B.J. Coleman’s continued erratic play.

Coleman was supposed to challenge Graham Harrell for the backup job, but he didn’t do himself any favors during Family Night, when he chucked two interceptions.

“I thought the first one was poor,” Mike McCarthy said of Coleman. “I had a chance to talk to him. The second one was a jump ball and really didn’t give him a chance. He did some good things, but the two turnovers was obviously the black eye for B.J. Coleman.”

Harrell, meanwhile, did just fine in the scrimmage, hitting 9-of-12 passes for 88 yards and a touchdown. The question remains whether he could win a regular-season game.

Although he hasn’t done much of it lately, Young has proven he can win in the regular season. His career mark is 31-19.