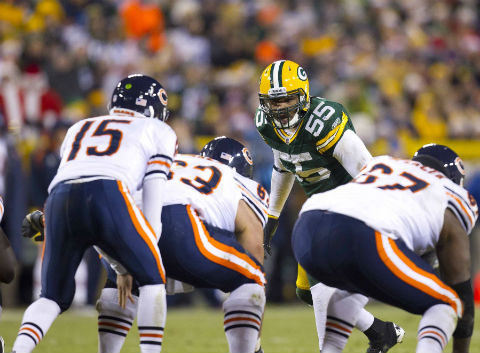 We had to get around to this eventually. Where some local media hack would finally ask someone on the Green Bay Packers why they released one of their best… only… playmakers on defense, inside linebacker Desmond Bishop.

Although he missed all of 2012, Bishop had 115 tackles, five sacks and two forced fumbles in 13 games in 2011, but that production meant nothing to Big Ted and The Boys.

So, Ted and Coach Awesome say they released Bishop because their inside linebacker group is deep.

This past week, both Packers general manager Ted Thompson and coach Mike McCarthy have stated the June release of the 28-year-old Bishop was a byproduct of what they felt to be one of the team’s deepest collection of inside linebackers.

These are the same assholes who’d tell you you can never have enough good football players. But apparently you can, if you can release a guy who was on the verge of stardom the last time we saw him on a football field and let him sign with your biggest, shittiest rival. I mean, why not let him try to win his old job back in training camp?

Then there’s defensive coordinator Dom Capers, who likes to use the word “athletic.”

“We like (last year’s starters A.J.) Hawk and (Brad) Jones,” Capers said. “They were basically our guys for most of the season last year. And we thought we made pretty good progress defensively. Rob Francois, when he’s been asked to go in and play, you remember two years ago he went in and got a couple game balls and made big plays for us. Jamari Lattimore has been around here and has become one of our best special teams players. We like his athletic ability. And then you have two draft picks the last two years in Terrell Manning and Sam Barrington. And those guys are both athletic.”

Ah, so Bishop, despite his production, was not athletic?

We sure as fuck know no one has ever labeled Hawk “athletic.” So you like these young, “athletic” guys and the totally non-athletic guy that Big Ted drafted way back when and will never part with because he’ll then have to admit failure and that other guy who may or may not be “athletic?” Instead of the most “athletic” inside linebacker we’ve seen in some time?

Then, here’s second-year inside linebacker Terrell Manning basically saying no one in the current group can do all the things Bishop did.

“I wouldn’t be surprised to see a couple guys mix in on certain downs and things like that because everyone does something different,” Manning said. “If we could all just combine and be one person, we’d be the ultimate linebacker, but we can’t. We’ll see how it goes. It’s the coaches’ decision at the end of the day.”

Ah, so if you guys could form like Voltron, you’d really kick some ass, huh?

That would be awesome if Voltron was one of the Packers inside linebackers, wouldn’t it?