Somehow, Giorgio Tavecchio is Still in the Kicking Competition 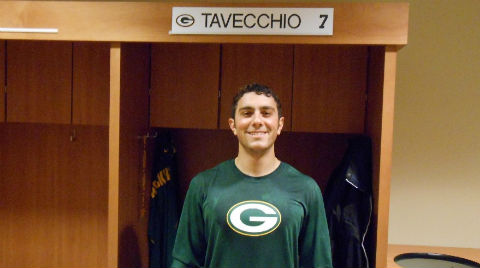 He isn’t on the team anymore, but Green Bay Packers coach Mike McCarthy says Giorgio Tavecchio is still in the kicking competition.

The Packers released Tavecchio on Monday after they signed Zach Ramirez on Sunday to compete with Mason Crosby. Three kickers are apparently one too many to have in camp, but McCarthy says there’s a scenario where Tavecchio could return.

“What I told him, he’s still part of the competition. We need to cut to 75, will take it all the way until tomorrow. The final cutdown is not clear to us. The kicking competition isn’t over. We have a good handle on Giorgio’s performance. There’s a scenario where we may bring him back. Hoping to resolve sooner than later. Important for kickers to take advantage opportunity and game.”

Tavecchio took advantage of most of the opportunities the Packers gave him. He outkicked Crosby in camp and his only major misstep was missing a field goal in week 2 of the preseason. But then he didn’t get any opportunities in week 3 against Seattle.

Crosby took the only field goal and extra point tries of the game and hit them both. It seemed like the writing was on the wall at that point — the Packers were going with Crosby, despite his inconsistency.

And then — surprise! — Ramirez enters the picture. The Packers will have less than a week to evaluate him, so unless he’s perfect, it doesn’t seem like he has a realistic shot to make the roster.

Presumably, if Ramirez and Crosby both look awful this week, then that’s the scenario in which the Packers would recall Tavecchio.

In other words, you should feel real confident in the Packers kicking situation going into the regular season.