The Packers Might End Up Trading a Tight End 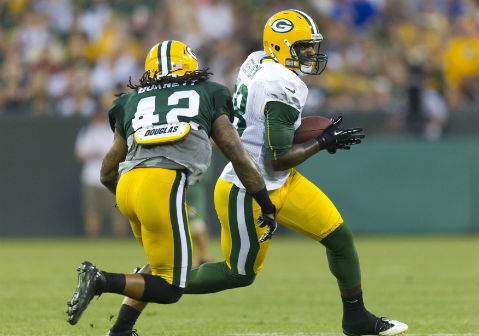 The Green Bay Packers have what appear to be plenty of capable tight ends on the roster. They just might end up shipping one of them somewhere else.

Ed Werder is reporting that teams have been inquiring about trading for one of the team’s tight ends and it appears Brandon Bostick is drawing the most interest.

Bostick was an undrafted free agent last year and spent all of last season on the Packers practice squad. Despite that, he’s had an impressive preseason and seems to have a decent shot at making the final roster.

The only thing that could derail him there appears to be the logjam at tight end. In addition to starter Jermichael Finley, the Packers have D.J. Williams, Andrew Quarless, Ryan Taylor and Matthew Mulligan, who they signed as a free agent in the offseason.

William and Taylor were on the active roster last season and Quarless was on injured reserve.

You have to think all of those guys have a pretty decent shot at making it again this year, but someone from the group has to go. Six tight ends is a luxury the Packers can’t afford.

The Oakland Raiders have been mentioned as a potential trade partner. They’re pretty thin at the position and former Packers exec Reggie McKenzie is the GM in Oakland.

If the Packers get anything for Bostick, that’s a win since he was undrafted. Although, our bet is the team would prefer to keep and develop him and move one of the other guys.

Previous Article
Vince Young Isn’t the Packers No. 2 Yet
Next Article
Good and Bad News on Packers Injury Front