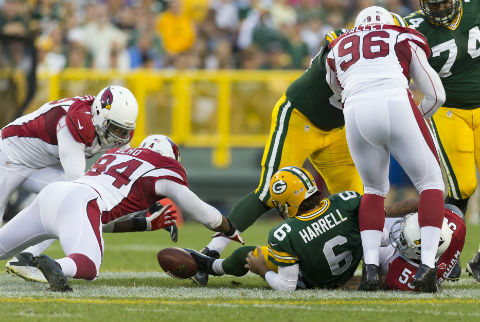 Hey, why not call it exactly what it was? The Green Bay Packers managed zero points, dropping their preseason opener 17-0 to the Arizona Cardinals.

So, let’s start with the good.

Aaron Rodgers hit James Jones for 50 yards on the No. 1 offense’s only series…

Alright, we’ll pick out some more highlights, but here’s a good summary of the game.

My boy Kelly Hayes likes to pick out players who suck on teams we like and label him “your boy.” As in, “Your boy Dick Weeks was a solid 0-for-5 tonight.” Dick Weeks being the Brewers Rickie Weeks. We call him Dick because, well, only a fucking Dick is batting .209 in August.

Everybody was my boy last night. The Green Bay Dick Weekses.

There’s a silver lining here, though. So let’s start with that.

The Packers actually held the Cardinals to four and out on their first two drives, when the No. 1 defense was in there. Or at least the parts of it that played.

The Packers sat Randall Cobb, Eddie Lacy, Tramon Williams and Casey Hayward, among others, and as previously stated, the No. 1 offense played only one series.

So let’s talk about what was interesting and then we’ll get to pointing fingers.

James Starks started at running back and was followed by Johnathan Franklin and then Alex Green. So, good luck making the team, Alex Green.

Unfortunately, all three of those guys sucked ass. Starks led the way with a 3.2 average. He carried 12 times for 38 yards. Franklin and Green managed only 2.3 yards per carry, although Franklin did catch a couple passes. Still, if your best back is averaging 3.2 per carry in the regular season, you may as well not even run.

Jarrett Boykin and Jeremy Ross were the second and third receivers, which wasn’t totally unexpected with Cobb and Jordy Nelson sidelined. The Packers drafted two receivers in the seventh round, but neither has been on the field yet. If that trend continues much longer, then these two guys probably have roster spots sewn up.

Ross’ chances won’t be hurt after he lined up as the No. 1 kick returner, although Franklin and Omarius Hines also returned kicks.

Then here’s the guy to keep an eye on — Tyrone Walker.

Walker is an undrafted rookie receiver out of Illinois State. He’s been impressive in camp and on Friday, he caught five balls for 41 yards. He’s still got a ways to go, but if Walker keeps playing the way he has been, he’s going to be hard to cut.

Walker racked up 22 of those yards on a nice run after the catch at the end of the first quarter.

Another undrafted rookie to keep an eye on is defensive end Andy Mulumba from Eastern Michigan. This guy was actually the second overall pick in the CFL draft. He’s fairly raw and unpolished, but had three tackles on Friday and played with the No. 2 defense.

Now, what we all came here for.

Harrell followed Rodgers and got by far the most time of any of the Packers backup quarterbacks. What did he do with it? Why, he shit the bed, of course.

Harrell was 12-of-19 for 76 yards. While that doesn’t look terrible on the surface, it is. After completing his first pass, Harrell threw a pick to Patrick Peterson on his next attempt.

That turned into the Cardinals’ first score, as Carson Palmer tossed a 38-yard touchdown to Andre Roberts on the next play.

Then Harrell fumbled after being sacked by John Abraham at the beginning of the second quarter. That was partially the fault of Marshall Newhouse, who clearly isn’t any better at right tackle than he was at left. Still, hold on to the fucking ball Graham!

What’s maybe even more telling is Harrell only averaged four yards per completion. Dink. Dunk. Dink. Dunk. Awful. No one ever said this guy had a big arm, but Jesus H. Christ.

B.J. Coleman came in next and continued to underwhelm, going only 2-for-7 for 15 yards. The newly-signed Vince Young saw limited action, but let’s hope he can pick up the offense fast enough so the Packers can get rid of these other two clowns, right?

Who else can piss off?

D.J. Williams — pack your fucking bags. Williams followed Jermichael Finley and managed one catch for eight yards. It’s the passes he dropped or didn’t catch that are finally going to earn him a ticket out of town, though.

Davon House — you thought you could start, huh? I remember hearing Larry McCarren saying Davon House is not having his best night at some point during the broadcast. That’s a fucking understatement. House got beat on the Cardinals first touchdown, but it was the play were he got smoked by Charles Hawkins for a 36-yard gain that sticks out in my mind.

Who the fuck is Charles Hawkins, Davon?

Anyway, I could go on, but I won’t. It’s the first preseason game. A bunch of guys didn’t play. The No. 1 units played sparingly.

Still, you have to wonder how the hell the Packers couldn’t manage a single point against the Arizona Cardinals.

Previous Article
Reminder: Charlie Laine is a Packers Fan
Next Article
Alex Green is on the Block