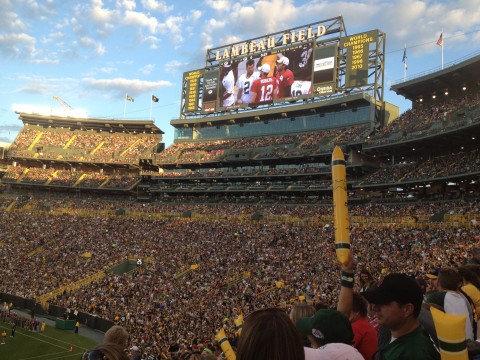 I know Green Bay Packers Family Night has taken some hits on this very site, but you won’t hear that from me. Not anymore.

It is a personal guideline for me that I never pass up a free opportunity to enter Lambeau Field. Even though I have lived in Green Bay for the majority of my life, I still consider walking through that gate and seeing that field a privilege.

So, when free tickets came my way, the decision was made: we were going to Packers Family Night.

First of all, let me say that the tickets to Family Night, if we had paid, are a meager $10 each. You can’t PARK at Lambeau on game day for that amount. So, my family of four got into Lambeau Field and sat in Section 124 for $40. On gameday, those same seats cost $97 each.

Also, in the parking lot around the stadium, hot dogs and brats were sold for $2 each. Cans of soda and bottles of water were $1. It was like going back in time. I didn’t know a $2 brat existed anymore. That is like going to a bar and seeing $1 tappers again.

Secondly, this is a NEW Lambeau Field. You have to sit in the bowl to realize how big of a difference the addition to the south end zone makes. It is mega impressive. With the bowl fully enclosed on the north, and the stands at the south end zone towering above the field, sound is more fully contained, reverberating around the bowl like you are in an arena. The sound system is awesome, and you have immense jumbotrons to your right and left.

I remember coming to Lambeau with my dad in 1985, to the infamous Snow Bowl game against Tampa Bay. The difference between Lambeau then and now is amazing, like a whole other stadium.

Even opponents who have grown used to playing at Lambeau Field, like the Bears, Vikings and Lions, will be in for quite a shock when they play there this season. They will find Lambeau a much louder and imposing venue. I expect the decibel level to rival what Seattle has, and it could be even louder. If you have seen Seattle’s stadium, it is at least open on one side. The noise was unbelievable Saturday night, and that was for a SCRIMMAGE.

Even knowing Packers fans, I was very impressed to see over 63,000 people packing a stadium for a scrimmage. Nearly all the no shows were in the club seats, with the bleacher seating and the south end zone completely full, just like for a game.

I didn’t hear a vulgarity uttered the entire four hours I was in the bowl, not that I am overly sensitive about such things. Nor did I see a single drunk. This was probably helped by the fact that almost exactly half of the crowd were women. You would never get that for a game. The strong female presence of course has a domesticating effect on the men.

I imagine it also helped that there were no opposing fans present. Add a couple thousand Vikings or Bears fans and disorderly conduct is practically a given.

The fireworks show after the scrimmage was actually worth the wait. It is probably the only time you’d be in Lambeau Field with the lights off. With the bowl dark, the music blaring and fireworks going off both across from you and over your head, it is a rather unique experience.

In fact, such a good time was had by all, that I will probably pay to attend next year. If you have some future Packers fans in the house who want to see Lambeau Field, Family Night is a must.