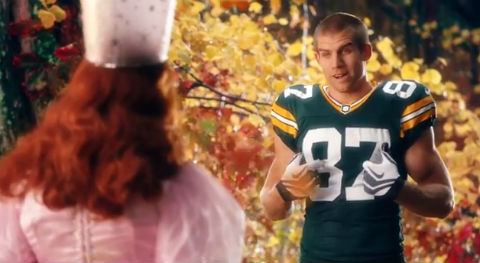 The new Jordy Nelson commercial for Travel Wisconsin debuted on Thursday. It was directed by Jerry Zucker, who we interviewed last week.

As we were told, it has a Wizard of Oz theme and it’s fairly entertaining. Also, Jordy’s wife has a cannon for an arm, but she’s not real accurate.

As for Jordy, he’s not a bad actor. At least not as bad as that dope Victor Cruz. Of course, this isn’t Jordache’s first acting gig. He did a really campy spot for some Kansas car dealership back in the day. It was awful, but fun to laugh at.

Anyway, this new spot actually wants me to visit Wisconsin the fall… until I remember how damn cold it is.