Here’s Peter King Talking to Golden Tate About That Play 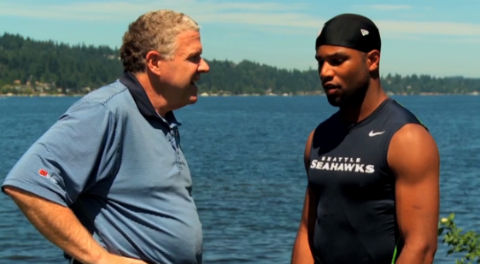 Fat man Peter King was up in Washington recently and he talked with Seattle Seahawks receiver Golden Tate.

What did they talk about? Well, Petey unleashed some of his usual glorious, probing questions like, “Look at this lake! How do you practice?!”

“Well, because I’m a fucking professional and get paid to play football and not walk around and ask people stupid questions about lakes.”

Tate says he’s a real swell guy. Takes one to know one, I guess.

By the way, how uncomfortable do you think it is being stared down by Peter King like Tate is here? Kind of looks like he’s in his leering-at-little-girls stance.