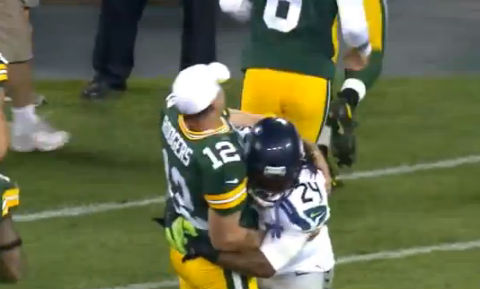 The Green Bay Packers crapped the bed against the Seattle Seahawks on Friday night. Quarterback Aaron Rodgers played only one series, but he was in pretty good spirits after the game anyway.

That’s probably because Seahawks running back Marshawn Lynch gave him a giant bear hug. And then he tickled Rodgers’ sweet bro mustache.

What the hell is going on here, you’re probably wondering? Well, both Rodgers and Lynch played at Cal and they shared a backfield in 2004, when Lynch was a freshman and Rodgers was a junior.

So they probably have a shared hatred of Stanford.