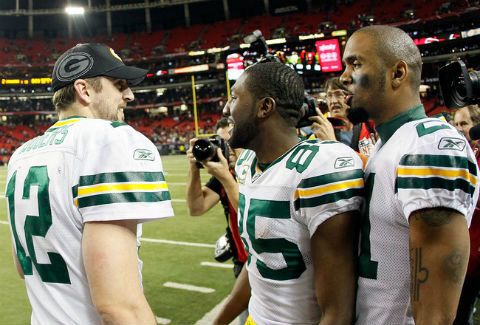 Aaron Rodgers seems to have a target painted on him these days. But that’s probably alright when Charles Woodson has your back.

Rodgers has taken a bunch of criticism, first from Minnesota Vikings receiver and former teammate Greg Jennings. Jennings has been bitching all offseason about how his vag hurts and Rodgers wasn’t a good enough leader. Then the Green Bay Packers all-time leading receiver, Donald Driver chimed in.

Driver asserted that the issue was that Rodgers didn’t take the blame when his receivers screwed up like — apparently — other quarterbacks do.

Well, Chuckles is having none of it.

“I don’t understand where it’s all coming from,” Woodson said again. “I think A-Rod would consider these guys his friends, so for stuff like this to be coming out about him now that the guys are gone, it’s got to be hurtful to him because what are they talking about, to question his leadership ability, his leadership skills? The guy is one of the best players in the NFL, and I think he does a great job as far as leading them into battle.

“I’m not sure where the attacks – and believe me, they are not warranted, for sure – I don’t know where it’s coming from.”

Woodson went on to suggest the criticism was a “receiver thing” and we’d have to agree. Is there any bigger group of prima donnas in the NFL than at the receiver position?

Jennings sure as hell fits the bill.

Woodson went on to praise Rodgers even more.

“I would say this: There’s been times throughout my career there when defensively we put a piss-poor product on the field, and we’ve been in games and won ballgames solely on the arm of Aaron Rodgers and the legs of Aaron Rodgers and what he’s been able to do throwing a ball to a Greg, a Donald, a Jermichael,” Woodson said. “A couple years ago, we were 15- 1, and if we have any other quarterback other than Aaron Rodgers, we’re 7-9.”

Ain’t that the truth.

For his part, Rodgers told Fat Man Peter King he don’t pay no time to that jive.

“People taking shots at me who aren’t relevant to this team and to this locker room doesn’t mean a whole lot to me. Those comments do wash over with me without a reaction, because they don’t matter.”

Previous Article
You Are Not Engaged Enough with the Packers!
Next Article
Hey, the Green Bay Packers Showed Up In Week Two of the Preseason