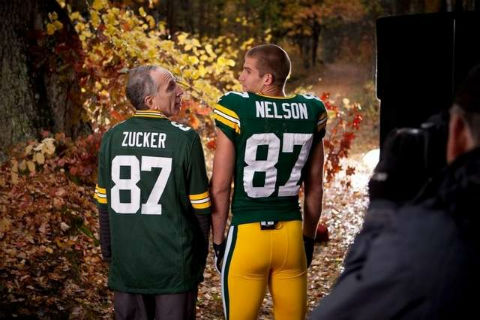 How the hell did we land this one and what does it have to do with the Green Bay Packers, you’re probably wondering. Well, Jerry Zucker, who directed Airplane!, Kentucky Fried Movie and Ghost, among other things, is from Wisconsin.

Grew up in Milwaukee and he’s a huge Packers fan, but we’ll get to that later. Zucker also directed a spot for the Wisconsin Department of Tourism starring Jordy Nelson. That debuts tonight at the Meyer Theater in Green Bay. Jordy will be making an appearance and you can too — tickets are $20 at the door or go here if you want to get them in advance.

So, I chatted with Jerry last Friday and asked him a bunch of stupid questions about the spot, film and, of course, the Packers. And these are his answers.

TP: How did you get involved with this commercial?
JZ: I grew up in Wisconsin and my brother did a couple of these and had a lot of fun. David was going to be shooting a movie during that time so he asked if I wanted to do it and I said yes.

TP: What is it about?
JZ: It’s funny and it shows off the Wisconsin fall as well. It’s hard to describe it other than that. (Jordy) starts out in Kansas and finds himself in Wisconsin in the fall and it’s beautiful. It’s funny – sort of a play on the Wizard of Oz.

TP: Are you a Packers fan?
JZ: Huge. I never outgrew it. Of course there was nothing… another football team in Los Angeles to distract me. I grew up as a kid during the Lombari era. That was the greatest and I just never shook my enthusiasm for them.

TP: So you sat through some pretty bad decades in the ’70s and ’80s
JZ: I try to ignore those. I black those out. [laughs]

TP: What’s your favorite memory of the Packers?
JZ: Obviously the Ice Bowl. I was watching it live when they played against Landry and the Cowboys. Ray Nitschke, Dowler – I loved all those guys. My memories are of the great players throughout the years, more than any particular moment.

I just remember all these guys like Jim Taylor. I’m not good at remembering games, but I remember one where Jim Taylor was just a force of nature getting across the goal line. Bart Starr, Reggie White, Brett Favre.

TP: You mentioned Brett Favre. Where do you stand on Favre?
JZ: Brett Favre gave me years of entertainment. He was a great quarterback to watch. I was like everyone else when this whole thing happened. Obviously, I didn’t know all the details, but I would side with Aaron Rodgers and the Packers on that one. It wasn’t classy… I was pissed quite honestly, but now that time has gone by… he was such a great player. He really brought back a team. I’m grateful for all those years.

TP: What have you been working on recently?
JZ: A bunch of things. We just finished shooting a movie for the Hallmark channel. It’s a musical based on a series of children’s books. It’s for kids called Dear Dumb Diary. We were shooting up in Utah and it was fun working with all those kids. We just finished that up. We’ve got a couple scripts in the works. I’ve actually written a script, but I’m rewriting it now.

TP: Is it anything like your early stuff?
JZ: Not really. The one thing I’m working on that’s like that is a stage show. It’s a new thing for me. I have no idea what I’m doing. What Airplane! was to those disaster movies, this show is to Broadway musicals. It’s different though because it’s not the tone of those other satires in the sense that our other satires were all in the style of mocking that hard-hitting style of people being really serious, but doing silly things. Of course, if you’re mocking a Broadway show then the idea is everybody is singing and dancing and pretending to be happy.

TP: When will we be able to see this?
JZ: I have no idea. With a movie, you finish the screenplay and do draft after draft and that can take a long time too. You kind of show it around to studios and either people say yes or no, or they say yes for half the money you want to make it for, but with a stage show, you really have to write it and get the music in place and you have to have actors audition and then you get enough funding to start putting together a more elaborate show. It’s just a more complicated venture, or at least it is for me because it’s new. I’ve never done it before. It’s fun doing something out of my element. It’s energizing in a way.

TP: What current comedic filmmakers do you like?
JZ: I like a lot of them. People ask me who my favorite filmmakers are and I tend to rather talk about my favorite movies than my favorite filmmakers. I love the documentary Searching For Sugar Man. That wasn’t a comedy, but I like the Kristen Wiig comedy Bridesmaids. I thought the first Hangover was great. I actually liked Ironman 3. I usually don’t like those big, bloated effects movies, but I thought this was really well done and I laughed a lot. There was really some great humor in there.

Alright, that was only 10 questions, but we call these interviews we do 20 questions, so there you go. Half if better than none. Here are a couple of my favorite clips from Kentucky Fried Movie. If anyone can find Catholic High School Girls in Trouble, please send it on. Now, Count Pointer Count.

Also, here’s a little Big Jim Slade for that ass.