Seattle Seahawks and Their Fans: A Bad Joke

by Monty McMahon
in Articles & Analysis
281 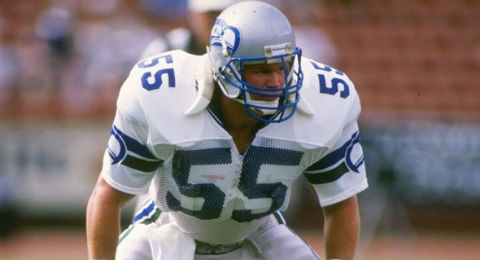 This post was written by E. Wolf in response to the Seattle Seahawks chicanery with that turd of a human being, Lance Easley, earlier this week. He is not happy, to say the least. However, he knows a thing or two about Seattle and its football team because he grew up there. Here is his glorious diatribe.

It has been almost a year since the infamous Fail Mary, in which victory, rightfully belonging to our beloved Green Bay Packers, was snatched away from our clutches by one of the most appalling instances of malfeasance and incompetence not just in the history of the NFL, but in the history of sport. Never before, to my knowledge, has a call been universally decried by the announcers and post-game analysts as this, analysts including Trent Dilfer and Steve Young — hardly Packers fans.

We can never know for sure what effect this ultimately had. Ostensibly that lost game cost the Packers an opening-round bye in the playoffs, which allowed Jim Harbaugh to observe the difficulties the Packers had against the read option with Joe Webb and the hapless Minnesota Vikings. It could very well be that in this alternative, “true” universe, the Pack went on to capture their second Super Bowl victory in three years. On the other hand, Aaron Rodgers and the Pack may not have played with the same urgency in Houston against the Texans, who at that point, were the best team in football. The Packers, of course, ripped them apart. We do know, however, that it colored both teams’ post-season position.

Instead of being embarrassed or humbled by this, Seattle Seahawks players, staff and their fans continue to gloat — along with the man in question responsible for it all. This is a man who is attempting to capitalize on the harm he did to our beloved Green Bay Packers, all the while daring to call himself a Christian while he preys on our small to moderate and most assuredly temporary misfortune.

This author cares not to examine the psychology of this despicable human being. Rather, as a native Seattleite-in-exile and hardcore, maniacal Packers fan who is rumored to literally bleed Green and Gold in alteration, I seek to answer WHY Seahawks players, staff and fans act in this manner even today. The Seahawks most recently held a charity softball game making light of this. This, on top of fan behavior we have all observed on this blog and many sports forums, as well as in real life encounters. Simply consider this — had this softball game been scheduled in Green Bay, and had the roles been reversed in our favor, I can assure one and all with metaphysical certitude that Mike McCarthy, Mark Murphy and the Packers organization (let alone the fans) would never allow this to happen.

And so we see once again that meaning arises from differences — here the differences between our Green Bay Packers, one of the most storied, hallowed franchises in NFL history, and an upstart expansion team spawned at the height of bad taste: the mid 1970s. The Seattle Seahawks are a pitiful failure that proves when you cannot cry, sometimes you have to laugh.

Just off the top of my head, consider this dreadful comedy:

At the very core, at the very essence of the matter is this one indisputable truth — the Seattle Seahawks have amounted to nothing more than a bad joke engrained in the DNA of every true Seattleite. I know, I was raised there. A local comedy skit show called Almost Live, which started in the mid 1980s and flourished in the 1990s made its heyday mocking this pathetic excuse for an NFL franchise. A montage of their skits can be found here:

The hits — the laughs — just keep on coming. They just don’t stop. And if Almost Live had not run its natural course and continued through the naughts, the laughs would continue to this day. Matt Hasselbeck running his mouth off about how, “We want the ball, and we are going to score,” only to throw that pick six to Al Harris. An artificially intimidating home environment that deserves far less attribution to supposedly die-hard fans, and far more to Paul Allen’s architects. One sorry Super Bowl appearance, in which they could not overcome a couple of questionable calls — as opposed to a universally denounced, instantly result-changing call undone by incontrovertible photographic evidence that unleashed a backlash so severe it ended the referee lockout in an instant. All of these moments and more would have been comedy gold for John Keister and Co. of Almost Live. But we can still enjoy more than a few laughs all the same.

Aside from one Super Bowl appearance featuring mediocre play at best, (which is hardly anything to cherish or boast about), probably the only bright spot you do have are the heady days of Zorn to Largent, and later Krieg to Largent, where a feisty band of upstarts led by Chuck Knox fought a valiant fight when hopelessly outclassed by outright superior teams of the AFC in the 1980s, like Dan Marino’s Dolphins, Boomer Esiason’s Bengals, or Marcus Allen’s Raiders.

Contrast that with the mystical legacy of the Green Bay Packers that exudes history, tradition, and excellence. This primordial, ancient power of the NFL, which rests in a small Midwest town, makes an impossible, surreal dream REALITY on the strength of this mystical aura alone. Whereas the Seattle Seahawks? A bad punch line in the DNA of every Seattleite — and by extension every football fan.

So go ahead Seahawks and Seahawks fans, carry on about how you had to have the most infamous bit of malfeasance to “win” a regular season game. Go ahead and enable that sickening, despicable hypocrite who dares to call himself a Christian while attempting to capitalize on our small misfortune created by his buffoonery. For our illustrious Green Bay Packers — marked by their colors of Green and Gold, and symbolized by that iconic oval G symbol emblazoned on their helmets and ubiquitously adorned throughout all of Packerland like an eternal, undying sun — march forward in a vainglorious bid to capture yet further Lombardi trophies. And as we embark on this quest, we ALL know that the joke, as always, is really on YOU.

Morgan Burnett May Be Getting an Extension

Morgan Burnett May Be Getting an Extension