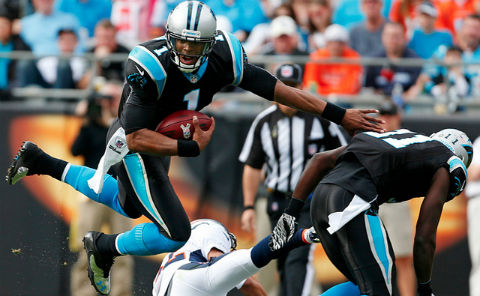 Well, the Green Bay Packers aren’t winning it. The Packers made it to the final eight in Dave Dameshek’s greatest NFL uniforms contest, where they were squared off against the San Francisco 49ers in the NFC’s current uniforms bracket.

It’s now down to the final two. The 49ers will face off against the winner of the alternate/classic uniforms bracket. That’s the Carolina Panthers 2012 alternate uniforms.

Yeah, the 2012 Carolina Panthers alternate unis are in the finals (we fucked up, they’re the all blacks that are in the finals). And guess what. They’re going to win — as of this posting, the Panthers have over 500,000 votes, while the 49ers have about 85,000.

That could change if the 49ers start running a coordinated PR campaign like the Panthers obviously are.

“Hey, we’ve only been around for about 20 years. We have nothing to hang our hat on as a franchise. Our regular uniforms didn’t make it very far in this meaningless competition. So go vote for our alternate uniforms, so we can show what an awesome franchise we are!”

Carolina’s stadium will soon have a banner hanging that says “Best uniforms of all time — Carolina Panthers*.”

* They were our alternate uniforms from 2012, not our real uniforms, and this was voted by people who go to NFL.com. Also, we ran a PR campaign to win.

Actually, they probably won’t include that last part, but they will be awesome.

BECA– — USE WE HAVE THE BEST UNIFORMS IN NFL HISTORY, GODDAMMIT! WE FUCKIN’ RULE!

Good job, Carolina. I’ll drink your moonshine. I’ll put up with your fucking NASCAR. I’ll laugh when Cam Newton sucks balls for the first 10 games of every season and then runs off six wins in a row to close it, when the games mean nothing.

Best unis of all time?

Previous Article
Jordan Rodgers is a Free Agent…
Next Article
Colin Kaepernick: Packers Were Yelling At Each Other