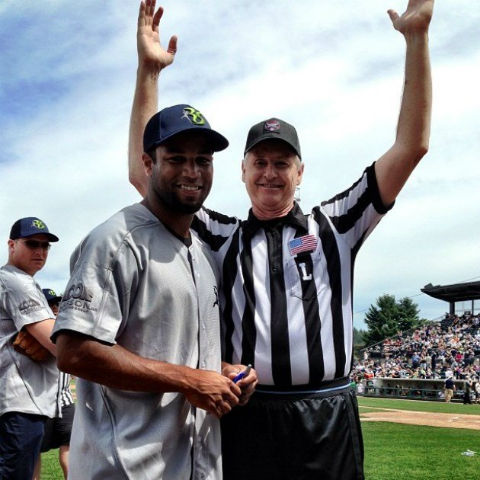 Is this fucking prick ever going to go away? I think it’s safe to say the answer is no. That’s Lance Easley, the ref who did the fuck job on the Green Bay Packers loss to the Seattle Seahawks, last season.

He’s standing with Golden Tate, the no-talent shitbag who shoved a guy down, got one hand on an intercepted pass and was handed a touchdown.

See how funny that photo is? Do you get it? Hilarious, right?

Is that enough? No. Easley is still milking this for all it’s worth.

He’s trying to release a book called “Making the Call.” Here’s a synopsis.

What if your life hinged on a decision that occupied less than a few seconds of time? What if a dream that became a miraculous reality was shattered in that same moment? What if you became in that instant the object of scorn and hatred for literally millions of people?

How would you deal with it? Where would your faith take you from there?

Lance Easley knows the answers to those questions! MAKING THE CALL reveals the man, the circumstances and the spiritual impact behind the most controversial call in all of professional football…perhaps in all of sports history.

He’s also selling autographed yellow flags and photos of that awful call. And who wouldn’t want to buy one of those?

Previous Article
Murphy: Packers Will Retire Brett Favre’s Number Before 2016
Next Article
As You Might Expect, People Still Aren’t Happy With Lance Easley