Johnny Jolly is Thankful for a Second Chance 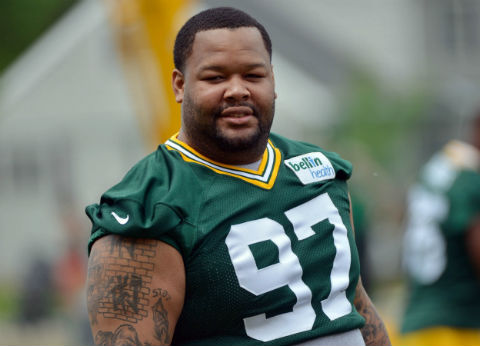 You know the story of Johnny Jolly. He had his best season for the Green Bay Packers in 2009 and then got suspended by the league for violating the substance abuse policy, arrested multiple times for codeine possession, spent time in the slammer and then reappeared a new man with another chance this offseason.

Jolly is thankful he’s been given that chance.

“I’m so happy. I mean, I don’t know many guys that get a second chance. But a second chance back to the same team that you were drafted to? Man, that’s a blessing from God. The whole time I was suspended, I had faith I would be back in this position, and I just kept trying to do the right thing. Not saying it was perfect, the way I’ve done it, but I’ve done most of the right things and I’m back in this situation. I thank God for that.”

Jolly also told Jason Wilde he knows he let the team, among others, down.

That attitude is quite a bit different than the last time Jolly was with the team. He seemed almost defiant at times, especially about his legal problems. Time in the clink will do that to a guy, though.

The question now is can Jolly make the team? He’s currently on a snap count in training camp because he’s been away from the game so long. It would be a hell of a story if Jolly did make the final roster and early reports have been positive.

We won’t really know what’s realistic until we see Jolly in action, but it would seem like he has a shot to at least make the defensive line rotation. Back in 2009, Jolly made his biggest impact by knocking down 10 passes. He also had an interception, two fumble recoveries and 39 tackles.