James Jones is Not Amused, Yo! 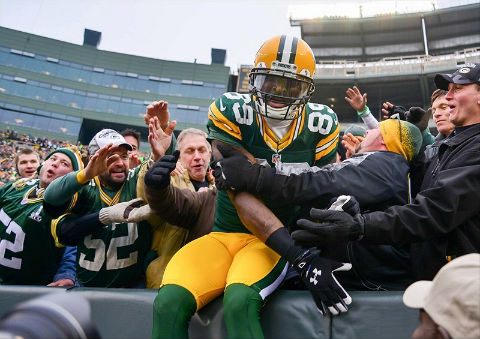 James Jones is still friends with Greg Jennings, but like most everybody, Jones was not amused with Jennings’ comments about his former teammate — Green Bay Packers quarterback Aaron Rodgers.

“I’m not a fan of his comments, but at the end of the day, you can’t control what he says,” said Jones. “I’m glad A-Rod hasn’t retaliated and said anything. G (Jennings) is a class act dude so it’s kind of surprising to see him say those comments. But everybody in this locker room (is) close. You don’t got to worry about us saying bad comments about A-Rod, especially comments that are not true. But everybody has their own opinion. G still my dog, A-Rod my dog, but G ain’t my dog when we play them on Sunday so I got to ride with 12.”

“But the comments he made, not cool at all, but A-Rod … don’t let too much get under his skin. It’s about playing football.”

Indeed it is, but Jennings has set himself up. He’s been a staunch defender of Christian Ponder since signing with the Minnesota Vikings. He’s also made claims that the quarterbacks he played with in Green Bay — Rodgers and Brett Favre — were actually made better by the receivers they had, not the other way around.

If Jennings is less than spectacular this season with Ponder, then we’re really going to know who made who better. We’re guessing it wasn’t Greg Jennings.

Vikings coach Leslie Frazier talked to Jennings over the weekend about running his mouth and the local media has to stop asking about it at some point. So hopefully this is the merciful end to this story. At least until the Packers play the Vikings.