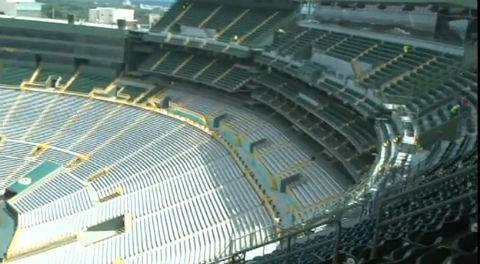 The Green Bay Packers held some sort of grand opening today where they showed off the new Shopko Gate and those 6,700 new seats they put into the south endzone of Lambeau Field.

This project cost the organization $146 million, some of which schlubs like me helped pay for by buying some of that worthless stock.

The majority of the new seats are in the 600 and 700 levels, which means you’re going to be freezing your ass off if you’re sitting in one of those seats in the dead of winter. And I mean more than normal.

When they were building these sections, one of the construction guys told me it was so damn windy and cold up there he had to put on a sweatshirt. And this was in the middle of summer. But hey, these seats have backs.

The new sections also provide a great view of Green Bay. It’s not exactly like looking out over Central Park, but it’s something. You’ll probably be able to see some smoke stacks from the paper mills and shit.

The coolest part is the viewing decks. That means you can actually go get a beer and still kind of see what’s going on on the field. If only they would put in a bathroom where you could piss and still watch the game.

That would be boss!

Previous Article
They Love the Green Bay Packers in Russia Too, Apparently
Next Article
1980s Jay Cutler is Back!