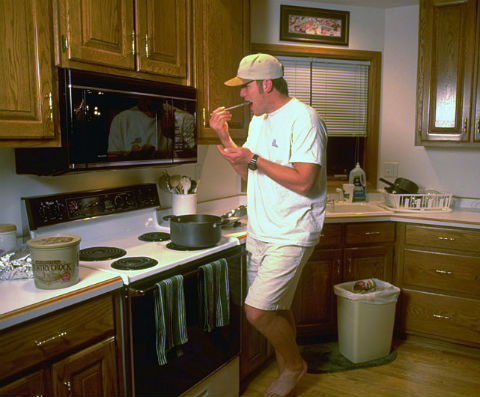 So SI posted a gallery of athletes in their kitchens. Why did they do this? No fucking idea, but that’s not the point. When I saw this, I said to myself, “Self, I bet there’s some Brett Favre in there.”

I was not disappointed.

This is some classic Brett Favre from way back in 1995 when he was at the height of his powers with the Green Bay Packers. When he was still beloved by Packers Nation. When he was popping Vicodin like they were Tic Tacs. When he was winning his first MVP. When he was throwing for a league-leading 4,413 yards and 38 touchdowns. Not to mention an appallingly low, un-Brett Favre like 13 interceptions.

What else was he doing? Brett Favre was cookin’ some fuckin’ dinner!

What was he cooking? Looks like some Kraft Macaroni and Cheese. Brett Favre — gourmet chef.

Don’t most guys take off their ball cap when they’re just hanging out around their house. I know I do. Not Brett Favre!

So, why don’t you give us a caption for this photo? Best one will get something from the Packers swag vault here at headquarters.

A.J. Hawk Has a Message for Greg Jennings