Greg Jennings is a Delusional Moron 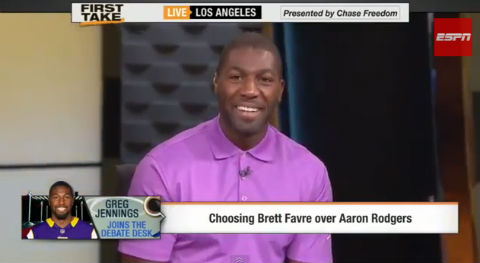 Want to watch Minnesota Vikings receiver Greg Jennings try to justify how, A. he isn’t selfish and B. how the receivers made Brett Favre and Aaron Rodgers?

Jennings was on ESPN’s First Take yesterday where Stephen A. Smith asked him why he chose to sign with the Vikings and, more pointedly, why he chose a team with Christian Ponder as their quarterback. Jennings, of course, stumbled around a bit before insisting it wasn’t for selfish reasons, but then in the next breath said it was because he wasn’t getting enough opportunities in Green Bay.

“I had to remove myself from that situation to allow those guys to spread their wings,” Jennings says, referring to the Green Bay Packers other receivers.

Oh really? Or did you have to remove yourself from that situation because other guys were getting more looks than you? Hmmmm….

Then Jennings goes on to try to justify Ponder.

Look at Donald Driver. I’d suggest he’s no better than the fourth-best receiver in Packers history (Hutson, Lofton, Sharpe), yet he holds most of the Packers career receiving records. You can’t tell me that isn’t a direct result of the quarterbacks he’s played with.

Anyway, Jennings keeps trying to justify Ponder for a while and then tells us how great the Vikings are, that they’re hungry and that Packers weren’t hungry last season.

Watch, if you want to get pissed off. Oh, and nice pants, Greg.