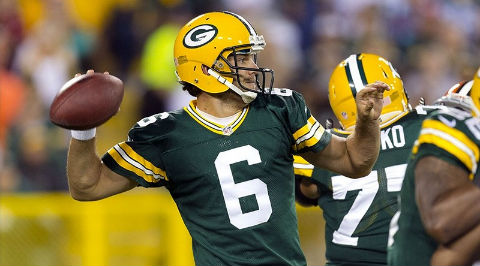 They’re really hyping Graham Harrell this year. From Mike McCarthy to quarterbacks coach Ben McAdoo to starter Aaron Rodgers, the Green Bay Packers are touting how comfortable their No. 2 quarterback is in the system and how he’s improved since his second year.

That’s all well and good because we get stories like this about the backup quarterback every year at this time. How many days until training camp again?

However, here’s the money shot, by none other than Rodgers.

“I think Graham’s done a great job. I think he’s really improved,” Rodgers said. “I think you saw it last year throughout the season as he became more comfortable. I look at him as being in the same spot that [Matt] Flynn was when Flynn was in his last year with us. We’re very confident in the offense and it means more to him to be successful every day in practice like you saw just a slight shift with Matt, and it was no surprise when Matt got a chance to play how well he played.”

What Rodgers is referring to there is the final game of the 2011 season. With the No. 1 seed in the NFC wrapped up, the Packers sat Rodgers and started Flynn against the Detroit Lions.

That was a 45-41 Packers win where Flynn threw for 480 yards, a team-record six touchdowns and no one played anything resembling defense. The Seattle Seahawks gave Flynn a big free agent contract to be their starter in the offseason, based largely on that performance.

And we know how that turned out.

Is Harrell capable of such a performance? Against that Lions defense anyone probably is. It would be like he was back at Texas Tech.

Against a team that can actually play defense? That remains to be seen.

Harrell is exactly 2-of-4 for 20 yards in his NFL career. In his regular-season debut in 2012, Harrell botched a handoff against the Saints that resulted in a lost fumble. He didn’t see action again until mop-up duty in that debacle against the Giants.

That being said, if Harrell is completely comfortable in the offense, there’s hope for him. He has plenty of weapons at his disposal. In a certain sense, so long as he doesn’t do anything stupid, he should be fine.

Finally, if for some reason, you want to relive every one of Flynn’s throws in that Lions game, then this video is for you.