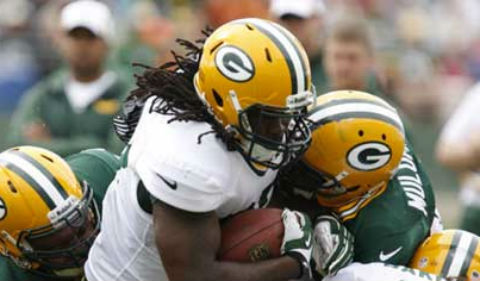 A day after a photo of running back Eddie Lacy’s fat ass started popping up all over the Internet, the Green Bay Packers rookie had his first impact on a training camp practice.

The Packers featured Lacy in their red zone drills, which were a major part of practice and he didn’t disappoint. Lacy had four carries and scored three times. He also turned a sure loss into a short gain by using the spin move he became known for at Alabama.

“Today I feel like it was my best day since I’ve been out here,” Lacy said after practice. “I was comfortable with everyone, and I feel like I ran smooth and made good reads, and I just hit the hole the way I was supposed to.”

So what about the weight?

The Packers list Lacy at 230, but he was at 238 during minicamp and he looks bigger now than he was then. On Tuesday, Lacy wouldn’t say how much he weighed and neither would anyone else, but coach Mike McCarthy was quick to rush to his defense.

“Going through the conditioning test, he was fine. If we had any concern about any guys they wouldn’t be on the field,” McCarthy said, via Jason Wilde of ESPNWisconsin.com.

As long as Lacy remains on the field, he’ll get into shape. And if he can run guys over like he looked to be doing on Tuesday, then who gives a shit how much he weighs?