Clay Matthews will Be Filling That Leadership Void 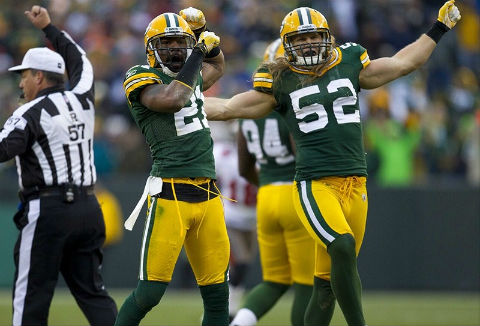 There’s been this lingering question about who’s going to lead the Green Bay Packers defense since the team dumped Charles Woodson. Clay Matthews has your answer.

In addition to eating your children for breakfast, he will also be leading your defense.

“I think it’s just the natural progression with leadership on this team,” Matthews said. “Obviously the more comfortable I am in the scheme, which I very much am, the longer I’m here, the more tenured I am, the more I have to take that leadership opportunity.

“In light of what has happened in the off-season with Charles Woodson departing, the new contract shows trust in my leadership and ability on the field. So you’re going to see that, especially in light of the last few years for our defense. We’re trying to turn it around and get this thing back to where we were when we had the Super Bowl run.”

Matthews has always been a good player, but you’ve never seen him being overly vocal in the locker room or on the field. He just kind of fit in and let his play speak for him.

That low-key demeanor appears to be a thing of the past. Matthews was reportedly much more vocal than in the past during minicamp and OTAs. He also worked extensively with the younger guys on the defense, who now look up to him.

“I think it’s definitely something natural as you get more comfortable in the system, being a leader,” Matthews said. “A lot of these young guys look up to you, especially having some personal success myself.

“I’m going to do everything I can to help this defense get to where we need to go. If that means being a little more vocal and having some fun, then hopefully these guys follow.”

Something tells us the Packers told Matthews he was going to have to be their defensive leader whether he wanted to or not when he signed that gigantic contract of his earlier this year.

And these young guys better follow him or this defense is going nowhere.