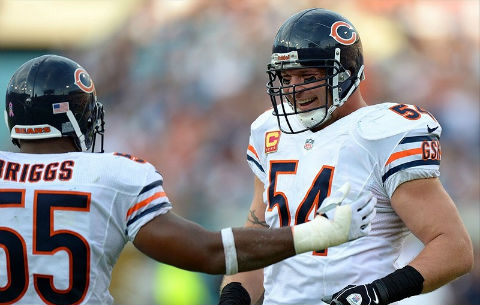 So now we have something in common with Brian Urlacher. You know, other than a sweet-ass barb wire biceps tattoo. None of us want that shitty football team known as the Chicago Bears to win.

Urlacher told Dave Dameshek he doesn’t want his former team to win a Super Bowl without him.

“I’m still rooting for them,” Urlacher said. “I hope they do well. They better not win a championship without me because I’ll be really pissed.”

When Dameshek asked if Urlacher was OK with the Bears doing just “well,” Urlacher replied, “Then I’ll be happy for them. Like I said, I have a lot of good friends on the team, but I don’t want them to win a Super Bowl without me.”

Hahaha… the Bears… a Super Bowl… maybe if the ghost of Walter Payton and Richard Dent from 30 years ago show up.

That aside, this is an interesting dynamic. The Bears lowballed Urlacher in contract negotiations, which pretty much told him they didn’t want him back. It’s like the anti-Ted Thompson move. That heartless prick just unceremoniously hands you your walking papers.

So Urlacher is okay with the Bears having some success, just so long as they don’t win a Super Bowl.

The good news for him is he has nothing to worry about.