That Donald Driver Statue is Done 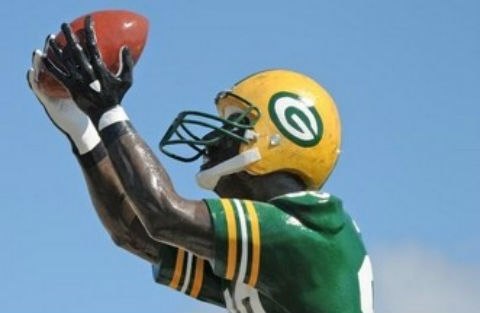 The transition of the Green Bay Packers receiver statue outside of Titletown Brewing Company is done. It’s now a Donald Driver statue.

It used to be a white guy wearing No. 88. It also used to sit outside of the Packers Hall of Fame when it was in the Brown County Arena.

A white receiver… hahahahaha. Maybe in the ’60s! No offense, Jordy Nelson, Jeff Query and anyone else I’m forgetting.

Driver will be getting his street — Donald Driver Way — dedicated on Saturday. That street is currently Pearl Street.

Amazing that the city council could give Driver a street so quickly. They’ve been talking about giving Mike McCarthy a street ever since he won the Super Bowl following the 2010 season. We’re not really sure that buffoon deserves a street, but… politics and bureaucracy at it’s finest.

So, guess who painted the statue.

If you said the Fence Painter, you are a winner! The Fence Painter is Chris Handler and apparently, he’s a real painter. Of houses and such… not an artist.

He’s also one of the those Packers fans. You know, the kind that like to draw attention to themselves wherever they go because they think they’re pseudo famous.

Of course this guy wore his full Fence Painter getup while painting the statue, complete with that stupid Fence Painter hat and some face paint.

Because I am the Fence Painter! Everyone must know I am that guy that paints my fence for the Packers! Love me! Adore me! I am a local celebrity!

Right up there with Tom Milbourn and whoever DJs on WIXX these days.

Who wants to bet he’s going to be on that stupid fucking TBS show?

Here are some photos, one of which is somewhat frightening. There are more at the Press Gazette.