Packer Have Signed Terrell Sinkfield, Who Ran a 4.19 40 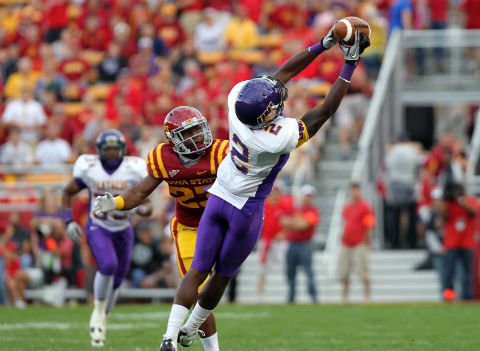 Normally we don’t pay much attention when the Green Bay Packers sign their 12th wide receiver of the offseason, but Terrell Sinkfield is a little different.

Why is he different? He’s the only football player we know of that ran a 4.19 40-yard dash. He ran it at the University of Minnesota pro day back in March. That number is slightly faster than the NFL Combine record of 4.24 seconds, set by Titans running back Chris Johnson in 2008.

So, in other words, this guy is blazingly fast. Does that mean he’s going to make the roster? Probably not. He’d have to beat out at least six other receivers to do so. Still, he might be fun to watch.

Sinkfield (6-0, 200) went undrafted out of Northern Iowa. During his senior season, he caught 43 balls for 499 yards and four touchdowns. He had 28 catches for 464 yards and six touchdowns as a junior.

Then, here’s a video where Sinkfield says he “just likes the thrill of the bomb.” General Buck Turgidson would be proud.