David Fulton Was Real Excited to Sign With Packers 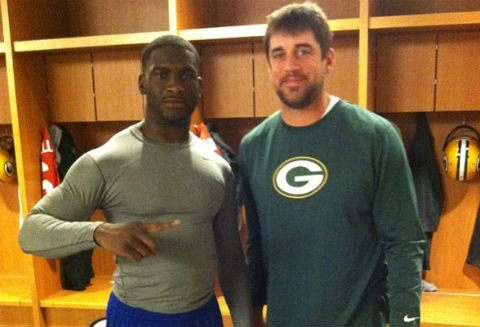 But we’re paying attention now. Why?

Fulton’s Twitter account. He’s changed his screen name to FultonIsland — you know, like Revis Island. So he’s obviously full of confidence, but that’s still not why we’re paying attention.

After he got signed, Fulton unleashed a series of expletive-filled tweets, which have since been deleted. We’re guessing he was just happy about getting a shot in the NFL, but he apologized for them nonetheless.

Then there’s the photo above. Gotta do the whole hero worship routine when you show up in the Packers locker room by getting a pic with Aaron Rodgers. Fulton is probably one of the guys calling Rodgers sir.

Also, look at that finger. Does that look like a Larry McCarren finger to anyone else?

I don’t know, but this guy is definitely built like a brick shithouse. So maybe he can lay done the wood on some fools coming over the middle.

Mason Crosby is Historically Bad, But…

Randall Cobb Was Tearing Around in Some Classic Cars [Photos]

Randall Cobb Was Tearing Around in Some Classic Cars [Photos]