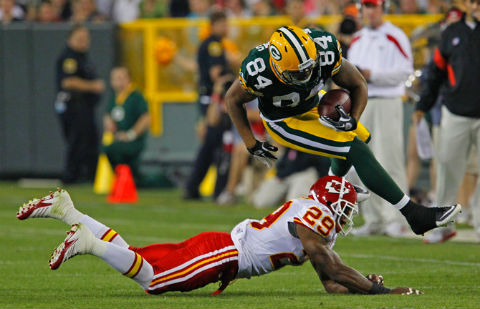 We made fun of Green Bay Packers tight end D.J. Williams earlier this offseason because it looked like all he was doing was partying and trying to pick up chicks while carrying around a stuffed teddy bear or a toy turtle.

At first, Williams was butt hurt, but it looks like he understands the message now. For a guy who has had more or less zero production on offense in two seasons, Williams knows this is a make or break training camp.

The Packers, as usual, have about 85 tight ends on the roster. Jermichael Finley is the clear-cut No. 1 and Andrew Quarless returns after missing all of 2012. The Packers also signed Matthew Mulligan in the offseason and special teams stalwart Ryan Taylor also comes back. Throw in Brandon Bostick, who spent all last season on the practice squad, and undrafted free agent Jake Stoneburner and it doesn’t look like there are any locks to make the team other than Finley.

Williams is starting to talk the talk.

“This is a huge year. There’s no more time for rookie mistakes,” Williams said. “We had the lockout, so we had that excuse. Then we had a whole year of playing the way it’s supposed to be played with the offseason and OTAs.

Williams should get plenty of opportunities in the preseason, but he needs to take full advantage. If Williams doesn’t separate himself, the Packers are likely to move on before the season begins.

Williams is the smallest of the Packers tight ends and isn’t known as much of a blocker. It’s the same knock on him that he had coming out of college. If it hasn’t changed by now, it probably isn’t going to.

Unless Williams has a spectacular training camp catching the ball, our bet is he isn’t around for the start of the season.

No Favorite to Start At Safety For Packers