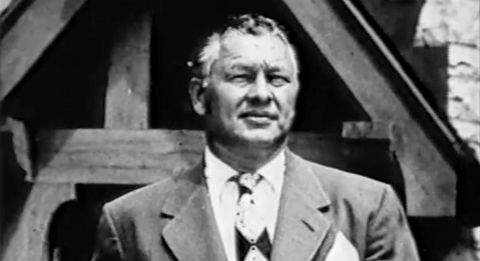 Green Bay Packers founder/coach/player Curly Lambeau came in at No. 10 on ESPN’s list of the top 20 greatest coaches in NFL history.

They’re rolling out the list one by one and it will conclude on June 11, when Vince Lombardi will obviously take the top honor. That is, providing these clowns know anything about football.

Lambeau finished one spot ahead of Bill Parcells.

Lambeau’s Packers won a record six NFL titles, a total later matched only by fellow NFL pioneer George Halas with the Bears. Green Bay also advanced to two other championship games under Lambeau and had only one losing record in his first 27 seasons.

Lambeau’s Packers were the first pro team to use the forward pass as an offensive weapon. Lambeau also is credited as the first coach to run daily practices and utilize pass patterns. He stands in fourth place in NFL history in games coached and victories.

Then, here’s there video, which is mostly about Lambeau Field for some reason.

Previous Article
Randall Cobb Was Tearing Around in Some Classic Cars [Photos]
Next Article
Aaron Rodgers Likes His Offense, But Not All of His Running Backs